More
Articles today i learned (til) Tap That 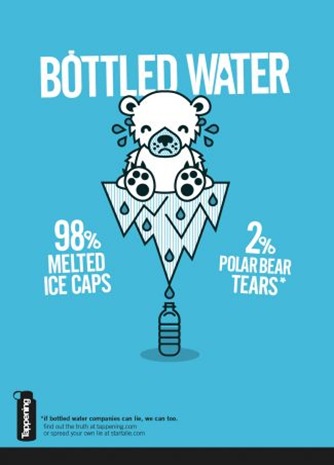 Conservation is not a commonly exercised word for most Americans.  A booming economy once offered us blissful ignorance from contributing our share of frugality and it prevented us from joining the rest of the world in maintaining a conscience.  However, as vital resources such as freshwater diminish and global population continues to propagate, Americans should begin to choose conservation despite the fact that most financially don’t need to.

Drinking water is already a precious resource in some countries and climate change will only increase pressure on freshwater supplies1.  The city of Delhi is short on water supply this summer by about 50 million gallons2; children in sub-Sahara Africa drink out of waterholes where animals bathe in from lack of any other water3; and the UN reports that a third of the world’s population is enduring some form of water scarcity4.  Considering other looming water wars across the globe, it seems immoral of us to purchase a plastic water bottle that takes 3 times as much freshwater to produce than what’s in the actual bottle5.  Now more than ever, every drop counts.

The bottled water industry, although perhaps not the most environmentally hazardous industry in our country, is one of the cleverest for it seems to have duped us all. It made a $10.6 billion profit in 20106 on something we can all attain for free.  It has managed to “manufacture a demand for water as a commodity to be bought and sold for profit,” stated Gigi Kellet5, director of the Think Outside the Bottle Campaign, by costing consumers $1,400 per year for eight glasses a day versus the $0.49 per year that eight glasses of tap water a day would cost7.

Not only are bottled waters sneakily detrimental to bank accounts, their production uses 17 million barrels of oil annually – enough to fill one million cars for a year7.  Extracting water for bottling places strain on flows to natural rivers, streams, springs, as well as ecosystems and groundwater levels5.  Also account for the fact that plastic takes hundreds of years to decompose and only 13% of the 29 billion purchased water bottles annually are recycled8, and one might ponder choosing tap water over bottled.

Most Americans are aware of the world’s water crisis and the environmental consequences of consuming plastic-encased water, yet some still adamantly refuse to drink anything but bottled water.  The largest misapprehension for most people is that bottled water is cleaner than tap water.  Consider though that the bottled water industry spends tens of millions of dollars a year ($162.8 million in 20065) advertising their pristine water sources, falsely leading consumers to believe that it must, in fact, be cleaner than tap.

The fact of the matter is, 47.8% of all bottled water is derived from tap water9, including Glaceau SmartWater, Nestle Pure Life, Alaska Premium Glacier and Yosemite10.  Pepsi was forced to change their Aquafina label in 2007 to accurately describe that their source came from a public water system11.  Coca Cola’s Dasani is also derived from a municipal source.  In 2003, Nestle’s Poland Spring was sued for false advertising in a class action lawsuit charging that their water, which supposedly came from springs, was actually just heavily treated ground water12.  The suit also stated that another Nestle source “stands over a former trash and refuse dump, and below an illegal disposal site where human sewage was sprayed as fertilizer for many years.”

The Natural Resources Defense Council (NRDC) reports that the source for Spring Water, the bottle with a picture of a lake surrounded by mountains on the label, was from an industrial parking lot next to a hazardous waste site.  Brands such as Artic Falls Bottled, Glacier Mountain Bottled, and Everest are all bottled in New Jersey, Ohio and Texas, respectively10.

Not only does bottled and tap water generally come from the same place, the municipal water board purifies these sources more than the bottle manufacturers.  Regulated by two different agencies, the Environmental Protection Agency (EPA) requires more stringent testing and purity standards for tap water13 than the Food and Drug Administration (FDA) does to bottled water.  In fact, bottled water rules actually allow for some contamination by E. Coli or fecal coliform while tap water rules prohibit any contamination.  There are also no requirements for bottled water to be disinfected or tested for parasites, unlike the rules for big city tap water systems.13

Several cases have been made for contamination in bottled water, including carcinogenic chemicals.  The NRDC tested 103 bottled waters in 1999 and concluded that 4% of the bottles violated the excessive coliform bacteria standard, 21 bottles contained more bacteria than allowed, and 8 bottles had levels of arsenic that tested at a level of potential health concern.13

The FDA’s seemingly negligent rules are completely exempt for waters that are packaged and sold within the same state, which account for 60-70% of all bottled water sold in the United States13.  If the product is declared on the bottle simply as “water,” “carbonated water,” “filtered water,” “seltzer water,” “sparkling water,” or “tonic water,” then it is not considered drinking water by the FDA and their quality standards are not required for these labels.13

On a side note, the vice president for communications of the International Bottled Water Association (IBWA) is Tom Lauria, the former lobbyist for the tobacco industry.  EWG points out that he “has had extensive experience distorting the facts and misleading consumers in an attempt to hide the truth about the industry that pays his salary.”  The man who once denied that smoking was addictive14 is now communicating that bottled water is a beacon of health.  Do you see the parallels?

Others argue that bottled water is just more convenient than tap water.  Sadly, we have come to confuse a plastic bottle’s disposability with “convenience” but there’s nothing more “convenient” than clean EPA-regulated free water running from your kitchen faucet.  Is the issue an unwillingness to stand at the sink with a reusable bottle for 10 seconds?  Bottles such as Hydros come equipped with a filter so that you don’t even have to pour from a Brita filter pitcher anymore.  Being on-the-go is not a noteworthy excuse either since there are public sources in every park, school, office, and stadium in the United States.

Although taste is highly subjective, arguments were also made that bottled water tasted better than tap water.  Consumer’s tastes have been shaped by cunning marketing and the erroneous belief that bottled water is healthier than tap water.  However, in taste test after taste test, people can’t tell the difference between the two.  The University of Maryland’s Student Government Association (SGA) conducted a taste test between tap water and Pepsi’s Aquafina, their school’s official bottled water, and found that twice as many students preferred tap over bottled15.  The hosts of Showtime’s television series Penn & Teller: Bullshit conducted a blind taste test comparing waters that showed 75% of New Yorkers preferred city tap water to bottled waters16.  The hosts of the show conducted another test where a sommelier handed out water menus with $7 bottles of “L’eau du Robinet” (French for “tap water”), “Agua de Culo” (Spanish for “ass water”), and “Amazone” (“filtered through the Brazilian rainforest’s natural filtration system”) on them.  The patrons had no idea that all of the extravagant bottles were filled with the same water from a hose in the back of the restaurant.

In the end, tap water tastes the same as bottled water, is more convenient, is less expensive (about 500 times less expensive17), and is purer than bottled water.   Over 50 universities across North America have joined the Ban the Bottle movement that seeks to eliminate plastic water bottles from campuses.  These campuses have recognized our country’s unspoken responsibility, a responsibly that comes with affluence and the ability to set precedents for other prosperous countries.   They’ve recognized that we need to start conserving whatever we can because we share the world’s resources with 9 billion other people.  They’ve recognized that corporation’s privatization of water has lethal consequences for those less fortunate than us and that tap water is the environmentally noble choice.  It’s time for everyone else to opt for tap water too.