More
Articles today i learned (til) Ultraviolet radiation: what you can’t see can still hurt you

A few weeks ago, a friend of mine showed me an article on MSN about a man whose face was obviously more wrinkled on one side than the other. Mr. McElligott, the gentleman featured in the article, drove a delivery truck for 28 years, exposing the left side of his face to the sun for several hours each day. I have heard several times throughout the years about the importance of sun protection, but hadn’t ever dwelled on the topic for much time. Once I read about Mr. McElligott, though, I was quite intrigued and started thinking about the whys and hows of sun damage, UV radiation, and wrinkles.

Here you can find an “up-close and personal” version of the center picture. (How cool are his eyes?!?)

As you may already know, skin is made up of three major layers: the epidermis, dermis, and subcutis (also known as the subcutaneous layer or the hypodermis). As in the diagram below, the epidermis is on top, then the dermis, and lastly the hypodermis. Freckles and moles, as well as sunburns, appear in the epidermis. The dermis houses the structural elements in skin which keep it firm and elastic. This is the section of skin where wrinkles form. 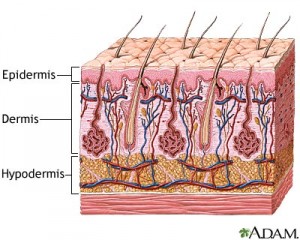 Sunlight is known to negatively affect skin. This is because UV radiation (part of sunlight) can suppress the immune system, damage DNA, and alter skin texture, blood vessels and skin pigment. While conditions like thin skin and easy bruising are usually associated with old age, they are often lasting effects from UV damage as the majority of skin damage comes from the sun and not from Father Time.

The Sun emits three types of ultraviolet radiation: UVA, UVB, and UVC, with wavelengths of ~315 to 400 nm,  ~290 to 315 nm, and ~100 to 290 nm, respectively. UVC radiation is absorbed by the ozone layer and doesn’t reach ground level. UVB radiation makes its way through the ozone layer and is the type of UV that hits the epidermal layer of skin and causes sunburns or tans; it is also known to cause skin cancer. Unlike UVA radiation which is relatively constant all year long, UVB radiation is stronger during the summer months. UVA is unique in its ability to pass through glass. Thinking back to Mr. McElligott, UVA radiation’s ability to penetrate glass led him to have a build up of UVA damage of the course of his career. Even on days when he drove with his window up, he would have been protected from UVB rays, perhaps not getting a sunburn or tan, but would have still received the negative effects of UVA. UVA rays cause damage to the dermis, destroying elasticity and potentially causing mutations in DNA. Out of all of the UV radiation that reaches us from the Sun, there is over 20 times more UVA than UVB.

Harm to the skin caused by the Sun’s UV radiation is often referred to as photoaging, or dermatoheliosis. Photoaging is caused when UVA and UVB rays enter the skin, negatively affecting two of skin’s structural proteins, elastin and collagen. Radiation damages elastin and causes a build-up of altered metalloproteinase enzyme. Normally, metalloproteinases (also known as collagenases) help reverse skin damage by creating new collagen. Unfortunately, the metalloproteinase from the damaged elastin does the exact opposite— it breaks down collagen, leaving the skin with a broken collagen structure and wrinkles. (For a study on the effects of metalloproteinase,  check out this article.)

Exposure to UV radiation in sunlight, in addition to air pollution and smoking/second-hand smoke, can also subject the skin to free radicals. Free radicals are molecules (or atoms) with a single, unpaired electron. Because a free radical lacks the second electron, it is unstable and thus seeks out another electron. When it reaches another molecule, the free radical takes an electron, completing its electron pair while leaving the second molecule with an unpaired electron (a new radical). This snowball effect continues throughout the skin, activating altered metalloproteinase and causing damage to collagen.

Well, I hope you enjoyed learning more about wrinkles and UV radiation! Remember, prevention is key! Make sure to slather up in some good ol’ broad spectrum SPF 70 next time you go shoot some hoops (or do whatever it is that you do) and enjoy this fine video about why we need the Sun (even though it hurts us sometimes):