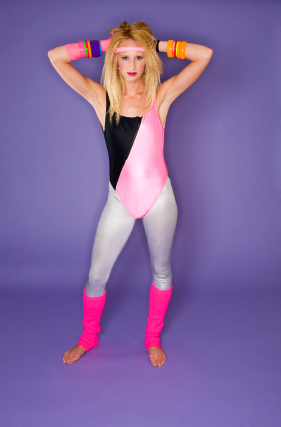 Picture a typical 1985 aerobic dancersize class at the local YMCA.  Bright spandex, side pony-tails, colored leg warmers, metallic leotards.  Lots of makeup, minimal sweat and sex appeal were the 80’s requirements for a good work out.  Gym culture has evolved since the Era of Questionable Fashion but one aspect will never change- music.  LOUD music.  There’s no way those 80’s women could do a rhythmic 8-count of floor kicks so enthusiastically without Cyndi Lauper’s motivation.  Nowadays, I don’t even bother to work out if I don’t have access to music.  There are a lot of reasons why I don’t bother to work out but even when I’m feeling particularly motivated to exercise, I still need my IPOD!  And judging by the number of headphones I spot at the gym, most people like working out to their tunes as well.

So why the dependency?  Not only is music fun to listen to but music can actually make our adrenaline surge.  Several studies have indicated that music tempo correlates to changes in heart rate, blood pressure and breathing rate.  When the tempo (the rate of speed) of a song and athletic performance are synced up, an average person’s endurance is prolonged.  Some athletes even claim music is like a legal drug because of its effect on their endurance.

It makes sense that listening to fast-paced music can increase your heart rate but a study at Virginia’s Hampden-Sydney College actually proved it.  The study showed that participants who listened to music while riding bikes actually traveled 11% farther than those who rode with no music (McCook 2005).  In another study, dance music at 142 beats per minute (BPM) was used in a 10-kilometer trial and the results were compared to the same study without music.  Average speed, power and heart rate were higher in the group who had music (Harmon 2007).  However, the effect of listening to music while working out is not completely hypnotic; the test subjects cycling at higher speeds also had higher perceived exertions.  This suggests that they were fully aware of how hard they were working, despite the use of music (Harmon 2007).  Therefore music does not reduce the recognition of effort during exercise but it does improve the experience by providing a fun distraction.

Research also shows that the distraction of music can reduce up to 10% of perceived exertion during treadmill running at moderate intensity (Karageorghis 2008).  One study published found that basketball players prone to performing poorly under pressure during games were significantly better if they listened to catchy, upbeat music (Reynolds 2010). “The music seemed to distract the players from themselves, from their audience and from thinking about the physical process of shooting,” said Christopher Mesagno, a lecturer at the University of Ballarat in Victoria, Australia, and the study’s lead author.  The music let the body work from muscle memory without interference from the brain. “The music was occupying attention that might have been misdirected otherwise,” Mesagno said.

Another reason music may help you exercise is because of something called “synchronization.”  Music is conceived by our brains, played through our bodies, perceived through our sensory organs and then interpreted back by our brains.  You’re already tapping your foot to the beat before you realize what you’re listening to.  Same with exercising- you want to pedal at the rate of the music or tread to every dominant beat.   Research has shown that the synchronization of music to repetitive exercise (like rowing, cycling and running) is associated with increased levels of output (Karageorghis 2008). The tempo can regulate movement and also create an attainable flow.

I’m not saying listening to music while working out creates miracles; the body does have its limits.  Research finds that the effect of music seems to decline when exercising at an already intense level (Reynolds 2010).  For example, if running at an intense pace, increasing the music’s tempo will not have an effect on your speed or heart rate because they are already at a high level of intensity.  Which is fine since you wouldn’t want your heart rate to increase indefinitely until it explodes in the middle of spin class.  That’s not exactly the goal, don’t push it.  In conclusion, music can help during moderate exercise but when you increase the intensity of exercise, the feelings of fatigue will eventually override the music.

There are a couple of other exceptions.  “Background music typically reduces a person’s perception of effort by about 10%,” says Costas Karageorghis, head of research at the School of Sport and Education at Brunel University in West London.  Meaning, don’t forget your headphones.  Listening to the gym’s complementary radio will make you think you are working HARDER than you actually are!

That said, what’s the best song to work out to?  An exerciser whose goal during warm-up is to elevate the heart rate to 120 beats per minute should select accompanying music that has a tempo in the range of 80–130 beats per minute.  Successive tracks should create a gradual rise in music tempo to match the intended gradual increase in heart rate- tempos of 120 to 140 beats per minute are ideal.  That’s roughly the heartbeat of a casual exerciser who’s been on the treadmill for 20 minutes.

As obvious as this may be, choose songs you like.  Emotional ties to music can help performance even more (NPR 2011).  For example, Kanye West’s “Stronger,” lifts my mood and pushes me a bit harder, even though the tempo isn’t particularly fast.  I have friends who start every workout listening to Rocky’s theme song “Gonna Fly Now,” by Bill Conti.  Listen to whatever you gotta listen to in order to get motivated!  Start singing on the treadmill if you need to; who cares about a room full of people staring at you sweating profusely and gasping for oxygen as long as you’re feeling good, right?

I’ve compiled a list of example songs along with their beats per minute.  Try making your own playlist according to your heart rate goals and see if you can tell a difference in your work out.  If you can’t, try wearing a metallic leotard.