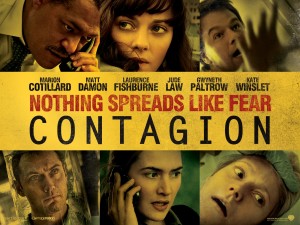 I have been looking forward to seeing the movie Contagion since it came out last year and I finally got to see it last night. I am a big fan of outbreak/apocalypse/zombie-type movies and, since I’m an immunologist, I thought this would be right up my alley. Boy, was I wrong. The problem with the movie wasn’t with the premise (a new flu-like virus makes the jump from an animal reservoir to humans and starts spreading rapidly), the casting (Gwyneth Paltrow, Matt Damon, Jude Law, Kate Winslet, Laurence Fishburne), or the science (mostly spot on). The problem was that the movie was way too realistic.

Hmmm, let’s see, we’ve got politicians and public health officials trying to keep the public from freaking out, a corrupt blogger/homeopathic proponent trying to get people to take an herbal remedy to recover from the virus (while he’s invested in the company that makes it), a protective father/widower (Matt Damon better watch out or he’s going to be typecast soon!), mass riots and looting, a dedicated scientist who makes a vaccine in no time, and the ultimate recovery of the country and the economy.

Wait, huh? Where are the zombies? Where are the ghost towns? Where’s the blood oozing from eyeballs? This is just like what would happen in real-life if a virus wiped out 1% of the population of the Earth. People would be scared. People would lose loved ones. People would get sick and recover and then we’d move on. I don’t need a movie for this! There are way more dramatic things happening in the world right now! I think some character development could have saved the movie, but there were so many story lines going on at the same time it was impossible to get invested in any one character and the story lines never really converged.

SCIENCE CRITIQUE: the screenwriters of contagion mostly did a good job with getting the science right and the set designers made things look pretty good. Only a few things stuck out. In one scene they were rotating a ribbon diagram of what was supposed to be the virus and its human receptor and they were describing four proteins, but it only looked like there were two on the screen.  It also didn’t make a lot of sense that Kate Winslet’s character, a CDC EIS officer, was explaining basic epidemiology to a group of state health department officials (don’t they have degrees in public health?). But the labs looked good and the CDC really looked like the CDC (although I’ve never been in a BSL4 lab).

The bottom line: see the movie if you want a preview of what the next terrible outbreak will be like, but stay away if you’re looking for zombies …