In 1970, 100,000 people gathered in Washington DC to protest the Vietnam War.  The deaths of Jimi Hendrix and Janis Joplin that year had fatally deglamorized the hippie lifestyle.  Smog-darkened skies were accepted as a byproduct of prosperity.  Environmental concerns had never been at the forefront of serious discussion.  It was Wisconsin senator Gaylord Nelson who first proposed a “national teach-in” on the environment to take place at every university campus in the US.  What better way to ignite a grassroots-led movement than to take advantage of the existing energy from anti-war protests?  The poignant events of 1970 awakened an emerging consciousness on which Earth Day was able to capitalize.  Consequently, 20 million Americans participated in the first Earth Day, and thousands of colleges protested against the deterioration of the environment.

Forty-two years later, new generations are still helping to make Earth Day a huge international event.  Although the subject of most concern has shifted from local toxic pollution to the complexities of climate change, Earth Day continues to stress the importance of a sustainable society.

This year at Georgia Tech’s 15th Annual Earth Day celebration the opportunity to unite our voices for a sustainable future was palpable.  Events were designed to encourage environmentally aware behaviors such as recycling, energy efficiency, and reducing disposable items.  The event featured a car exhibit, a green market, a clothes swap, an E-waste drop-off, free bike repair stations, Captain Planet, Reynard the Fox, a stage, and 70 exhibitors all on one sidewalk.

Most of Earth Day, I volunteered with the Engineers Without Borders (EWB) booth where participants had the opportunity to paint a recycled cardboard tile, with labels “land” or “water” or both, so that when all tiles were pasted together, a map of the world emerged.  The message?  “EWB wants to highlight the interconnectedness of our environment, our world and the importance of sustainability.  Our goal at EWB is to help people on an international level to become more sustainable,” said EWB president Hannah Kates. 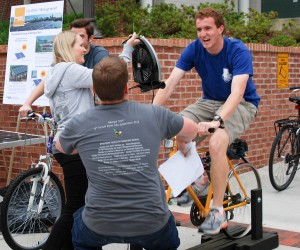 An Earth Day-goer for the last few years, Janna San Juan noted, “Earth Day seems like it’s growing every year.  It gets people excited and reinforces the idea of being green.”  She was looking forward to trying the ‘Renewable Energy Challenge’ where participants could race against a solar panel on a stationary bike to generate energy.  They could light a bulb or fan themselves, such as the person in this image chose to do.

Shoes flying through the air soon caught my attention. 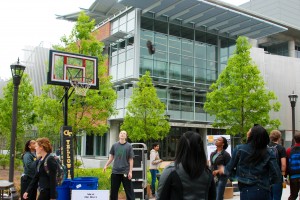 The ‘Shoot the Shoe’ booth was run by the women’s basketball team, where participants had the opportunity to throw an old tennis shoe through a basketball hoop.  Earth Day committee member, Luke Chambers, who was promoting the booth in collaboration with Nike’s Reuse-A-Shoe program said, “Nike’s shoe recycle program reduces the need for new rubber and other materials which decreases environmental impact.  Our goal is to collect 500 pairs of worn-out tennis shoes.”  He also went on to tell me that $10,500 worth of reusable office supplies were donated for the ‘ 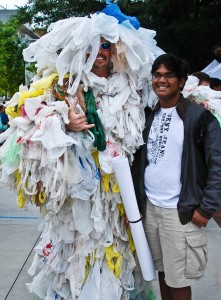 Office Supply Exchange’ event where students could shop for free.

Before I could walk anywhere else, I was accosted by what could only be described as the Abominable Plastic Bag Man.  One More Generation, the non-profit organization founded by two elementary school students, was at Earth Day to raise awareness about Americans’ plastic bag use.  Fittingly, their “Plastic Bag Monster” donned 500 bags, the average person’s yearly usage and, hopefully, scared many others into purchasing reusable grocery bags.

Like a child at a carnival, I let my senses lead the way at this event, so I ended up next in front of the live music.  This anomaly of a band, 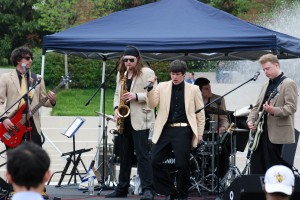 appearing in swing attire while at one point dishing out Spoon’s punk rock song “I Turn My Camera On,” attracted a large crowd with their energetic dancing and old school vibes.  Champagne Room lead singer Jared McGrath announced to the audience in between songs, “My favorite thing that comes from this Earth would have to be… beer.”  Cheers to that.

After taking dozens of photos of the self-proclaimed “Southern Fried Swing Punk” band, I turned around to find another simple sensory boost.  Dry ice!  It was the American Chemical Society giving out cups of cold smoking punch.

They really sealed the deal with some bubble action.  By filling a bowl with a block of dry ice and running soapy water over the top, they created a ‘CO2 bubble’ which eventually erupted into a cloud of fog.  The kids, myself included, loved it.

Free T-shirts were available for a very small labor fee.  You could collect your olive green “Helluva GREENgineer” shirt by participating in the ‘deconstructed’ maze.  Four eco-trivia stations were distributed throughout the event representing earth, wind, fire, and water.  Participants collected a stamp at each booth by answering the trivia question correctly, and four stamps got you the 100% organic cotton t-shirt.  “We’ve already given out about 150 stamps,” Marcela Moreno, a volunteer at the wind booth, informed me two hours into the event.  I quickly decided to take advantage of this freebie and ran to each station before the event ran out of shirts. 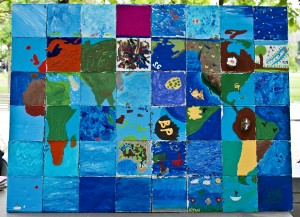 Near the end of the event, I went back to the EWB booth where all the tiles had been painted.  As I helped paste the painted world back together again, I couldn’t help but think about all of the strides that have been made since the first Earth Day in 1970.  The development of the EPA, the Clean Water Act, the Clean Air Act, necessary laws that were formed because of the grassroots effort behind an unsettled generation.  I then noticed that someone had painted a new continent in the middle of our Pacific Ocean, and someone else had painted trees and flowers in our Antarctica.  Clearly, we still have a lot to work on, but with a united society and events like Earth Day, we can still continue to make large strides to save our environment.