More
Articles today i learned (til) The Paleo Phenomenon 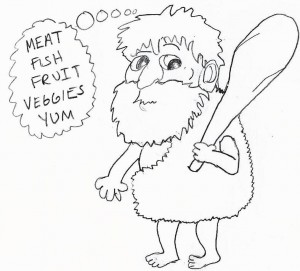 It seems like every other day, a friend of mine declares a newfound dedication to the Paleo Diet.  Nicknamed the “Caveman Diet,” Paleo is this season’s slimmer, fitter (but just as raw) Atkins diet.  I first learned about the elusive Paleo from my dedicated Cross-Fitter friend after asking her for an afternoon snack.  I fully expected some Goldfish or hummus-like options but my friend looked carefully in her fridge and gave me a choice between freshly-watered lettuce or coconut flakes.  Apparently my disturbed look alluded to what I was thinking (when did you start hating your taste buds?) because she then confessed to me that she started this Paleo Diet.  She explained how she stopped eating bread, to which I replied “Dear God,” and went on to describe her new enlightened Paleo lifestyle.

The Paleo diet theoretically takes us back to our ‘caveman’ days when we hunted rodents with rocks and scurried for nuts and berries.  Protein heavy; processed foods are out of the question; dairy is for infants; and sugar is the devil.  I’m not sure how the Paleo people know this, but apparently cavemen never ate any grains whatsoever, so neither can my friend now.  She carries wild canned tuna in her purse, munches on dried jerky meat from a bag fit for an astronaut (right picture), and mumbles about bacon all the time.

Shocked at the idea that someone couldn’t indulge in croissants, muffins, or baguettes with chunks of melted brie, I left my friend’s place horrified.  I thought of the possibility that lobbyists for the meat industry were behind the whole conspiracy and hated wheat with a passion.  I needed to find out for myself.  What’s the health benefit behind this fad? Is there any?  How has this pandemic spread to several of my friends already?  Will my love of carbs be strong enough to fight the Paleo takeover?

The premise behind the ‘Paleolithic’ eating is that humans should only eat what we’ve been genetically adapted for.  For 2.5 million years, the length of the Paleolithic Era, our human ancestors were just a bunch of fit muscular naked hunters-and-gatherers.  Human diets changed 10,000 years ago when agriculture was developed, but our 2.5-million-year-old genetics did not change the way we digested food.  Proponents of Paleo blame ‘Industrial Era’ food such as beans, dairy, alcohol and salt for obesity, cardiovascular disease, cancer, diabetes and high blood pressure.  However, I could not find any known cardiovascular benefits to becoming caveman again.  There IS an increased risk of higher cholesterol because of the increased meat intake, so Paleo might not be a good idea if you have high cholesterol already.

Paleo basically hates carbohydrates.  They attribute carbohydrates to high blood sugar, insulin resistance and eventual morbid obesity.  Doug McGuff, MD and proponent of the Paleo diet, broke it down like this (with perhaps a few more sophisticated explanations):

Paleo says that in this metabolic state, consuming high fructose corn syrup, sugar, or fructose of any kind will amplify these effects.  The only way to reverse this is with high intensity exercise.

In theory, I’d say this Paleo diet sounds good.  But all diets sound good in theory until you’re hungry.  Examples- a few of my Paleo zombie comrades have cheated on a few occasions which they don’t want to admit.  They’ll crave a banana nut muffin all week and allow a bite on an upcoming weekend.  The pizza or cookie monster inside of them might emerge at 3 AM on a Saturday night.  They’ve also ordered light spring salads at dinner only to reach for my deep-fried chicken finger basket after they’ve digested their lettuce in 4 minutes flat.  This worries me.  I do have to say, my friends look extremely fit and healthy, and probably the best looking I’ve seen them in the last 6 years I’ve known them.  So something is working.  It could be the strenuous Cross-Fit workouts though.

I’m very cautious about new hip diets so even after my research I was still not convinced I could get on board with the I-HATE CARBS Movement Paleo diet.  I needed to do some field research.  Meandering through the bookstore, I came across a Paleo Recipe Book and immediately started perusing through the pages.  The recipes looked pretty delicious so I snapped 18 pictures from my iPhone when no one was looking (don’t judge, I’m on school loans) and dashed from the aisle like a bandit.  I thought cooking one of the recipes would really make up my mind.

I decided to conjure up some balsamic braised short ribs with a carrot puree and frisee parsley salad.  I wasn’t sure what to expect but, I have to say, it was damn good (pictured right).  I started to think maybe I could ‘have Paleo and eat it too’….but only on Sundays, and with friends who could split the grocery cost with me.

All in all, I might consider going temporarily Paleo if I want to shed a few pounds but I’m gonna stick to my own health theory which is ‘everything in moderation.’  I don’t know about you, but I can’t get used to having my milk and cookies without either milk or cookies.  Plus diets that completely eliminate certain food groups are difficult to follow and can get very pricey.  If anything, I believe cutting red meats or the Weight Watchers diet are the best ways to go.  What diet could you get on board with?