More
Articles today i learned (til) Check it out!: SciShow 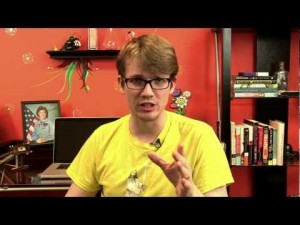 The concept of a series of YouTube videos specifically designed to teach science is one that may scare the casual viral video watcher away. Luckily for Hank Green, one half of the vlogbrothers and creator of SciShow, YouTube is not filled solely with casual watchers.

Hank Green’s adventures on the Internet began on January 1, 2007, when he and his brother John challenged each other to communicate only through videoblogs and the occasional phone call. The project, Brotherhood 2.0, launched one of the greatest communities on the Internet, Nerdfighteria (as a side note: Nerdfighters don’t fight nerds. They’re nerds who fight to decrease World Suck).

In the five years since that first video of Hank explaining why every weekday included a new video from the two, the Green brothers have created an online empire of charity (Project 4 Awesome, a yearly video challenge to raise awareness of charities), DFTBA Records (home of the music of Alex Day, Charlie McDonnell, Hank Green himself, and various other YouTube musicians), and an increased following of John’s books (including Looking for Alaska, Paper Towns, and the recently released The Fault in Our Stars).

Hank’s newest endeavor on the YouTube is his most ambitious by far. SciShow, a series of short videos posted twice weekly on various scientific concepts and events, makes the often feared world of chemistry, engineering, and generally nerdy subjects from high school and college much more approachable.

So far, Hank has addressed non-Newtonian fluids as bullet-proof clothing, an electric aircraft, how gamers are smarter than computers, and a few other various topics. The videos are short and very to the point; they are not meant to provide a full education, but rather plant the seeds of interest in the heart of anyone and everyone.

Along with SciShow, Hank works with his brother on a series called Crash Course, which aims to teach the fundamentals of the core classes presented in high schools and colleges. While John gets to focus on history and literature, Hank gets to go more in depth with the subjects presented in SciShow. Videos include tours of the eukaryotic cell, biological molecules, water, and an introduction to the chemical basis of biology, namely, how carbon is, in his words, “a hussy”.

I fully recommend taking about half an hour to go through both SciShow and Hank’s episode of Crash Course (take another day to watch John’s video on early agriculture). Hopefully, these endeavors help the brothers educate the YouTube generation into incredibly wonderful members of society.