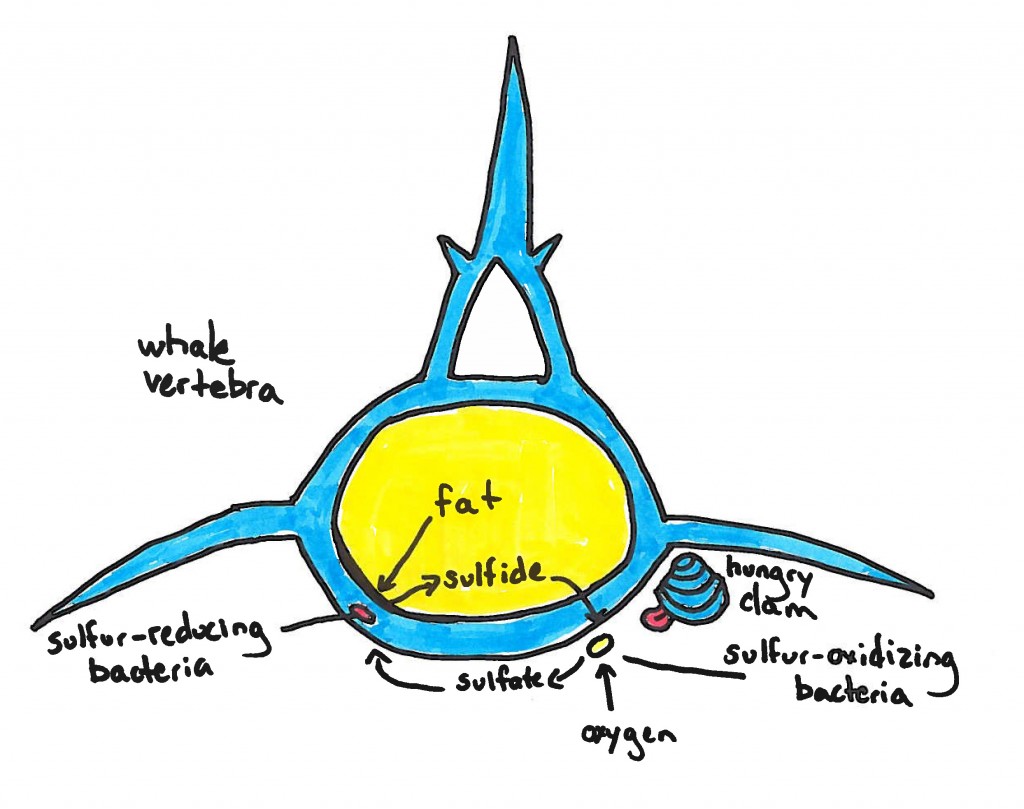 Normally, the term “dead whale” reminds me of long, tedious hours slogging through Moby Dick or sad images of beached or slaughtered animals, but a “whale fall” is a whole ‘nother beast.

When dead whales fall to the bottom of the deep sea, their bodies become food for some of the creepiest creatures out there. Normally there’s not a lot to eat down where the sun don’t shine, but whales are a mess of meaty goodness. And where there’s meat, there’s scavengers.

During the first stage of the whale fall scavengers like hagfish and sleeper sharks chew all the meat off the bones of the whale and poop all over the place. That poop makes good food for things like clams and mussels, who hang around during what is called the “enrichment opportunist stage”. But the weirdest and most awesome stage of the whale fall succession comes next, the “sulfophilic” stage. Yep, you read that right, these critters love sulfur the way an anglophile loves Downton Abbey. And they don’t just love sulfur, they breathe it like oxygen. Sulfate-reducing bacteria eat the fat that is left in the whalebones and breathe sulfate, turning it into hydrogen sulfide in the process. Then sulfur-oxidizing bacteria use the sulfide to make sugar, just like plants use sunlight to make sugar. And who eats that sugar? More clams.

So you’ve got whales feeding bacteria feeding clams feeding bacteria, all at the bottom of the sea, which is normally a cold dark void. The whole process can take over 50 years; so one whale fall can sustain a lot of critters for a long time.

Whale falls are really beautiful, too, and inspire some beautiful art. Here is a lovely stop-motion film depicting the life of a whale fall directed by Sharon Shattuck and Flora Lichtman.

Whale Fall (after life of a whale) from Sharon Shattuck on Vimeo.