If you’ve browsed the refrigerated section of your local natural foods store lately, you probably noticed a big case full of kombucha where the bottled water used to be.  Kombucha is a fermented sweetened black tea that comes in lots of flavors including some slimy varieties that are full of chia seeds.  What is kombucha, anyway?  Is it really good for you? Why is this drink exploding all over my car?  This, dear reader, is what we hope to answer with this article.

Kombucha is made by adding a symbiotic culture of bacteria and yeast (SCOBY) to sweetened black tea and allowing it to ferment.  The SCOBY breaks down the sugar and produces organic acids like acetic acid and gluconic acid that lower the pH (Sreeramulu, Zhu, & Knol, 2000). Different parts of the culture carry out different steps in this process and quite a lot of research has been done to identify exactly which species of bacteria and yeast are present in kombucha.  Recently scientists used high-throughput DNA sequencing technology (the same technology used to sequence the human genome) to show that Gluconacetobacter is the primary bacterial species and Zygosaccharomyces is the primary yeast species.  There are also significant levels of Lactobacillus in kombucha. (Marsh, O’Sullivan, Hill, Ross, & Cotter, 2014).  This information can be used to help researchers develop more efficient cultures and understand the ways the microbes break down sugar better. 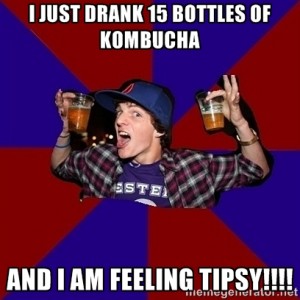 The bacteria and yeast in kombucha transform sweet tea into something entirely different, more akin to a tangy soda.  Zycosaccaromyces ferments the sugar, producing carbon dioxide and ethyl alcohol (ethanol).  The carbon dioxide dissolves in water and makes the tea fizzy (and explode all over your car), while the ethanol is converted into acetic acid by Gluconacetobacter.  Acetic acid is the active ingredient in vinegar and gives kombucha its slightly sour, tangy flavor. A small amount of the ethanol does not get used, and so most kombucha is about 1% alcohol.  For comparison most beers are around 5% and wine is around 12%.

So is kombucha good for you?  There are plenty of websites out there that will tell you that kombucha can do everything from cure cancer to make you shit on a regular basis, but well validated research on the topic is sparse.  There is something in kombucha that inhibits the growth of food poisoning like Salmonella, E. coli, and Shigella (Sreeramulu et al., 2000), but exactly what it is has not been worked out yet.  The antibacterial effect is not due to the pH of the tea, and the culture does not need to be alive to work.  There is also other good stuff in kombucha like caffeine (Kallel, Desseaux, Hamdi, Stocker, & Ajandouz, 2012) and antioxidants (Jayabalan, Marimuthu, & Swaminathan, 2007).   Antioxidants are awesome.  EGCG, one of the antioxidants in tea, has been found to inhibit the development of skin cancer (Lu et al., 2002) and the brain plaques that cause Alzheimer’s disease. (Rezai-Zadeh et al., 2005).

Kombucha is also a guilt-free soft drink option.  Microbes break down most of the sugar in kombucha during the fermentation process, and the finished tea usually only has about 30 calories and 2g of sugar per serving.   Because it is low calorie, kombucha is a good alternative to sugar sweetened beverages like soda, which have been associated with weight gain and obesity. (Malik, Schulze, & Hu, 2006)

There may even be a future for parts of the kombucha culture that we don’t consume.  During fermentation, the kombucha SCOBY produces a floating microbial mat, or pellicle, made of cellulose that looks remarkably like a jellyfish. We usually associate cellulose production with plants (paper is made of cellulose from trees), but bacterial cellulose is special.  It has long, fine fibers, is strong, and can be molded to any shape.  It is currently being studied for use in a variety of biomedical applications including cartilage replacements (Svensson et al., 2005).

Kombucha has a relative in Jun tea, a fermented beverage made with green tea and honey.  Jun may even be more healthy than kombucha because green tea and honey both have well documented benefits. (Crespy & Williamson, 2004)(Alvarez-Suarez, Tulipani, Romandini, Bertoli, & Battino, 2009) Because I keep bees and have a lot of surplus honey, I have been making jun tea for the last couple months.   To make it, I just brew 4 cups of strong green tea, dilute it with two quarts of water to cool to room temperature, stir in a cup of honey, add a SCOBY (I got mine online), and allow it to culture for 5-7 days.  Then I remove the pellicle along with a cup of the tea to use in the next batch.  I usually bottle the finished tea with a little fruit juice or cut-up fruit for flavor (although it is delicious without it).  The juice adds some extra sugar so the microbes can generate more carbon dioxide for an extra fizzy drink (just don’t open it in the car!).  Making fermented tea has been a fun and delicious experiment for me, so I say we raise a glass to Gluconacetobacter and Zygosaccharomyces…….microbes you can eat!

Crespy, V., & Williamson, G. (2004). Nutrition , and Cancer A Review of the Health Effects of Green Tea Catechins in In Vivo Animal Models 1.