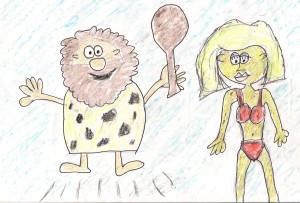 Let me set the mood for you: you’re an anatomically modern human living in mountains of Siberia. The year is circa 80,000 BC. Siberia is cold this time of year (okay, let’s get real, it’s always cold in Siberia). You’re in the midst of the last great ice age and you’ve taken up residence in a small cave. You’re happy and healthy, you just finished your dinner of Saber-toothed cat stew and you have the fur of that wooly mammoth you skinned to keep you warm. Just as you’re about to go to sleep, a particularly strong gust of wind blows by and a stranger takes shelter in your cave. But this is no ordinary stranger, this is a brown-eyed, brown-haired, dark-skinned Denisovan, an ancient hominid species distinct from humans. You think of killing the Denisovan at first, but you reconsider. After all, you’re lonely and you have needs. So you get freaky.

Okay, you caught me, that story is fictional. But how fictional is it? As it turns out, not very. In fact, we now know that humans have mated with other hominid species multiple times in their history. For example, in 2010, scientists working in the Pääbo lab at the Max Planck Institute for Evolutionary Anthropology in Germany sequenced DNA extracted from Neanderthal fossils and compared the sequences to those of modern day humans. What they discovered was startling: at some point in time, humans and Neanderthals interbred. By comparing the genomes of Neanderthals to various modern day human groups, scientists were able to determine that Neanderthals were more similar genetically to non-Africans than to Africans, suggesting that early humans in Europe and Asia mated with Neanderthals, while Africans did not. So what does this mean for you, the 21st century hominid? It all boils down to this: you’re not as human as you thought you were. In fact, if you have any European or Asian ancestry in you (that is, if you’re not 100% African), you are likely 1-4% less human than you thought you were. But wait, there’s more. You may be even less human than that.

Mere months after the Pääbo lab published their findings on Neanderthal DNA, they stumbled upon another find in the form of a fossilized distal manual phalanx and two molars in Denisova Cave in the Altai Mountains of Siberia. Through genetic analysis of nuclear DNA found in the fossils, Pääbo’s team was able to determine that they belonged to a previously undiscovered species of hominid. This species has come to be known as Denisova hominid, or Denisovans. Upon discovering this new species, Pääbo’s team set out to sequence the Denisovan genome from DNA extracted from the distal manual phalanx (fingertip) fossil. If this sounds ridiculous (isolating ancient DNA from a fossilized finger), it’s because it is. It is absolute craziness to me that this technology exists, but it does. I know, I know, it’s friggin’ awesome…but I digress.  Back to fossil DNA.

Through the development of radical new methods that are capable of sequencing 99% of the nucleotides in the genome over 10 times each, Pääbo and his team were able to unmask the Denisovan genome to an incredibly high degree of precision. So what did they find? They found that humans and Denisovans got it on (or to put it more scientifically, went through an admixture event). But unlike Neanderthals, they didn’t get it on quite as frequently, which means that unless you are Chinese or a Papua New Guinean, you probably aren’t very Denisovan. Denisovan DNA was found in trace amounts in the Han and Dai cultures on mainland China and in 3% of the genome of Papua New Guineans. The Denisovan DNA also gave scientists insight into what the species may have looked like. Denisovans likely had brown hair, dark skin, and brown eyes and probably existed in small population numbers with low genetic diversity. Denisovans were likely driven to extinction by modern humans some tens of thousands of years ago, but thanks to some horny Papua New Guineans, their genes live on.