More
Articles today i learned (til) An Egg-istential Question

Which came first, the chicken or the egg? 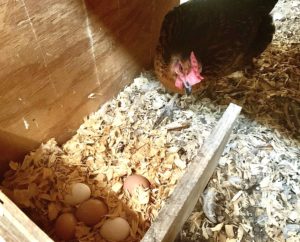 This can (and often does) go on forever, an endlessly frustrating loop of logical fallacy.

I was pretty surprised  then, when the answer was suddenly provided in one of my classes, a course on evolutionary ornithology. We were discussing a phylogenetic tree,  when my professor casually pointed out an easy, glaringly logical, loophole in the age-old query.

So, scientifically speaking, which came first, the chicken or the egg?

The amniotic egg, or cleodic egg as it is also sometimes called, is thought to have evolved between 340-370 million years ago, and is highly conserved across many classes and families, from mammals like us to crocodiles. The classification of amniotes includes all vertebrate animals with four limbs and amniotic eggs, so think all mammals (Synapsida), and reptiles/birds (Reptilia) (Sander 2012).

What exactly is so special about this egg? 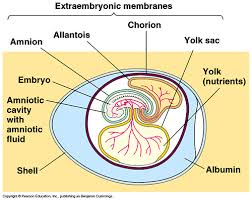 The amniotic egg is characterized by its complex of inner membranes. The allantois, which is directly attached to the embryo, primarily holds the waste products, while the yolk sac contains all the nutrients the embryo will need for development. The embryo is bathed in a stable fluid environment, surrounded amniotic fluid and enclosed in amnion membrane. The outermost membrane, the chorion, provides close contact between the eggshell and its internal contents, allowing for the necessary gas exchanges of O2 and CO2, and holding the other structures together. Finally, there is the outer shell layer, which can be leathery (as can be seen in some turtle species) or calcified, like the hard eggshells of birds and crocodiles. This outer shell is semi-permeable, again to permit the gas exchanges needed for respiration, and to keep moisture in and harmful microorganisms out (Sander 2012). 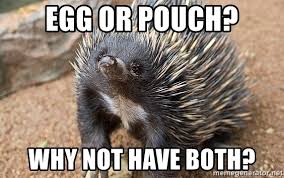 Quick aside- yes, mammals generally don’t lay eggs (excepting the monotremes such as platypuses and echidnas). However, the eggs that develop in the uterus before live birth are still considered to be amniotic eggs, since the embryo is surrounded by necessary membranes to encase fluid. They simply lack the outer eggshell and remain inside the mother’s body.  It is also worth noting that while the placental organ does perform some of the functions internal membranes have in other animals, most noticeably the nourishing role of the yolk, mammal embryos still have a yolk sac in early stages of development, as well as the other characteristic structures of the amniotic egg.

This general structure of the amniotic egg is a major landmark in the evolutionary history of life. By providing a way to contain fluid, it eliminated the dependence of reproduction on bodies of water to lay and incubate in, and thus opened up a whole world for vertebrates to expand into. In fact, it’s considered the most defining development allowing for the evolution of life on land! And these eggs are quite old, evolving no later than 310 million years ago with the last common ancestor of mammals and birds. Most estimates place the appearance of the amniotic egg between 340 and 370 million years ago (Sues 2016).

Alright, now let’s consider the chicken. The modern common domestic fowl (Gallus gallus domesticus), what we know as chickens, have a long and storied evolution like all birds, stretching back into the age of dinosaurs, and more specifically, the therapods. Therapods are thought to have first appeared in the late Carnian age of the late Triassic period, somewhere around 232.4 million years ago, as a clade of saurischian dinosaur. They were a widely diverse group, but main features included hollow, light-weight bones, and bipedality, and they were generally carnivorous. Within the more specialized subsets, there are the Tetanurae, which are further subdivided into Megalosauroidea and the Avetheropoda. The Avetheropoda, contained Carnosauria and the Coelurosauria, from which birds are direct descendants!

If we jump ahead a few million millennia, we can track down the last relative from which our favorite bird diverged. Gallus gallus domesticus, is a subspecies of the junglefowl, Gallus gallus, of the order Galliformes, suborder Galli, and family Phasianidae. Galliformes are originally from Southeast Asia and have been around for an estimated 50 million years. Although there are other jungle fowl with whom the chicken may share genetics, including the gray jungle fowl, Gallus sonneratii, that likely contributed the trait of yellow skin on their feet,  it well accepted that the chicken diverged most directly from the red junglefowl (Potts 2012). In one study by Sawai et al (2010), an analysis of DNA from 19 birds (including red and green junglefowl and several breeds of chickens), found that that the domestic chicken diverged from the red junglefowl  58,000±16,000 years ago, which had in turn diverged from its last common ancestor with the green junglefowl around 3.6 million years ago. This places our oldest chicken between 42,000 and 74,000 years ago (Sawai et al 2010).

The Results are in…Eggs are way older

Compared to the egg’s minimum of 310 million years, the chicken is practically a baby in evolutionary terms, somewhere around a mere 58,000 years old.

When you set the comparison in these terms, it is an easy landslide. Of course, you may very well be thinking, “that’s great and all, but that’s not technically a chicken egg. Surely you need a chicken for the egg to be a chicken egg, right?”

And you are not wrong- there are specific enzymes and other proteins that only chickens have which play a crucial role in their eggshell formation, with most people citing ovocledidin-17 as the primary example of this.

When you think of an egg, a hard-shelled egg, the kind of egg  one might decorate at Eastertime, or buy by the dozen at the supermarket, however, the defining features are not of a chicken egg specifically. First and foremost, you are thinking of the massively distinct amniotic egg, which has existed before birds, much less chickens, were around to lay them.

Yes, the question is rigged. It is a false dichotomy, and not meant to have a clear solution. If you are like me, however, this is the most satisfying ending; a supportable conclusion and some great practice in phylogenetic problem-solving.