This year, continuing the theme from the Taste of Science, the Georgia Tech STEMcomm team decided to host a Sober Science Speakeasy, a party all about the science of drinks. While looking around for something to prepare, the concept of “clear milk” was brought up, and I was intrigued. Clear milk? That’s practically oxymoronic. And yet, these drinks, called “clarified cocktails” or “milk punches”,  added milk to end up with clear, colorless products. Naturally, we had to investigate and try for ourselves. This is what we learned:

Milk is a colloid, with fat and proteins suspended in the aqueous solution. Since these are fairly evenly distributed, they usually scatter the light beam around in all directions in the Tyndall effect, making the liquid appear white and opaque.    Proteins in the milk, particularly caseins, repel each other at the normal pH of milk, which is what maintains that even distribution throughout. This is because the isoelectric point of casein, or the point at which it it is electrically neutral (uncharged) is around 4.6, but milk’s normal pH is closer to 6.6. The casein proteins therefore have a negative charge that makes them repel one another and spread out as far apart as possible.

When pH of milk is lowered however, by adding acid, the casein proteins will lose their negative charge, and stop repelling one another. This, along with the protein degradation, or unfolding of their shape, at the lower pH, causes many of them to clump together in solid blobs we call “curds”. They will separate out to the bottom, and the liquid left behind is called the “whey”. But these proteins don’t just separate from the rest of the drink- they take compounds with them, including much of the color! The proteins bind to molecules from the drink, especially polyphenols, which are associated with bitter/astringent tastes, like tannins in black tea or red wine.

Therefore, when you strain out the curds, you also remove compounds bound to the caseins. This “clarifies” the drink, stripping away most of its original color, and giving it a less harsh flavor. Some also claim that the addition of the remaining milk whey also gives the drinks a sliker texture, making them even more desirable.

This property of milk has been used to make clarified cocktails for many years, with the first written recipe dating all the way back to 1711. Even our favorite kite-flying founding father, Benjamin Franklin, was a fan, recording his own recipe for brandy-filled milk punch in 1763. You can still see the original document online in the Massachusetts Historical Society archives: https://www.masshist.org/database/263.

In our case, we went for a non-alcoholic version, with a base of black tea, grape juice, lemon juice, and of course, milk.

This concoction, lovely nicknamed “clarified purple cow punch” or CPCP, was initially dark reddish-purple, and while sweet, was also tad bitter from the black tea flavoring. The addition of the juice to milk resulted in a (rather unappetizing) mixture of curdled milk and juice in a clumpy, brown…milkshake? Ick.

At that stage, I was pretty doubtful that this was going to work. With a bit of patience, however, and several rounds of straining through cheese clothes and coffee filters, we ultimately ended up with a pale pink, ultra-sweet drink that proved pretty popular. There was no hint of milk flavoring or bitter taste, and all together, CPCP was a surprising success. 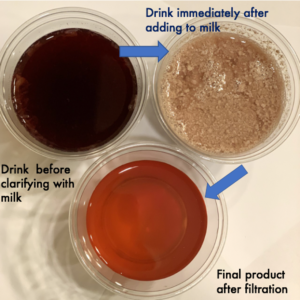 If you want to try making clear drinks yourself, all you need is some juice mix, an acid, and milk- and a lot of time to sit and watch the straining process. Make sure to add the acid slowly to the milk, and not the other way around, to ensure the proteins have time to bind to the polyphenols before curdling, and you’ll be all set to impress with your friends with this magically clear milk.