More
Articles today i learned (til) That sounds fishy…

While scrolling somewhere in the interwebs, I saw a post someone had made about trying to hold their breath during action movies whenever the characters went under water, to see how realistic/unrealistic the scenes really are. Someone responded with a comment in the spirit of, “Yeah! It’s sooooooo unrealistic. I almost died during Finding Nemo!”. As dumb as that joke was, it made me smile and got me thinking about how fun it would be to apply realism standards to an animated movie like Finding Nemo. Acting on the impulse (and if we are being completely honest, needing an excuse to rewatch a children’s movie), my friends and I attempted to view the movie from a scientific perspective, asking questions and pulling out scenes about marine life to research their factual basis.

Here is some of what we discovered:

Q: What is a typical clutch size for clownfish? Is their statement that there are “over 400 eggs”, accurate?

A: Yes, a clownfish can actually have anywhere from 100 to 1,000 eggs in a single clutch! They actually have a very interesting and unusual life history, as all clownfish are protandrous hermaphrodites, meaning that they are born with dominant male reproductive organs and inactive/recessive female reproductive organs as well. Within a single anemone, there is a single, monogamous mating pair, consisting of the only female of the group and the largest male, and the rest of the clownfish are developmentally “undeveloped”, sexual juveniles. Eggs are first released by the female into the nesting site, and then fertilized by the male and attached to a substrate surface, normally rock or coral. The male is in charge of caring for the eggs, fanning them to regulate oxygen levels and temperature. In addition, they will eat any damaged or unfertilized eggs to clear the nest…Marlin would have been feasting after that first, gory scene…Ew!

A: Nope, that’s very unlikely. The typical diet of a barracuda is smaller fishes such as jacks, grunts, groupers, snappers, small tunas, mullets, killifishes, herrings, and anchovies, but they aren’t known to eat fish eggs. Marlin has got that covered. 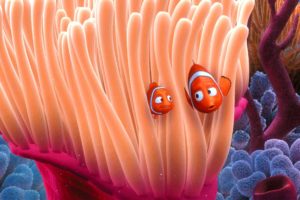 Q: What is the relationship between clownfish and sea anemones? Do they actually have to brush themselves to avoid getting shocked?

A: Sea anemones and clownfish have one of the most well-known symbiotic relationships, and it’s actually a bit more complex than one might expect. Sea anemones have nematocysts, stinging cells with toxins, on their tentacles, that they use for protection. The clownfish, however, has a unique mucus coating that prevents them from being affected by it, and they can therefore live in safety in and amongst the anemone. The sea anemone isn’t just protecting the fish for free though- the clownfish provides protection by chasing off potential predators, and also provides nutrients in its waste products, such as ammonia, sulfur and phosphorus. Recent research has also found evidence that the relationship between this organisms may be even more intimate, with evidence that microbiomes of the partners changes with their interactions and contact over time, possibly cycling carbon between them. However the physical touch modifies them though, the depiction of brushing to achieve recognition seems to be a bit of an exaggeration on the film’s part. Oh well, creative liberties I guess.

Lifespan of a Sea Turtle

Q: Marlin and Nemo talk a decent bit about how long sea turtles live. What is the average lifespan really?

A: Assuming the turtles shown are representations of green sea turtles (Chelonia Mydas), we don’t have an exact answer. The estimated lifespan is around 60-70 years, though, which is pretty darn long! 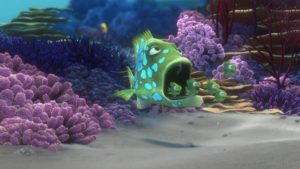 Q: What’s up with that fish that carried it’s kids to school in its mouth? Is that real?

A: Yes! There actually are types of fish, called “mouth-brooders”, that use their mouths to shelter their eggs and/or young offspring. There are many different types, including cichlids, sea catfish, cardinalfish, Bagrid catfish, pikeheads, jawfishes, gouramis and arowanas, and either the male or female may keep the offspring in their mouth. The most famous example is probably the female african cichlids, which carry their eggs for between 21 and 36 days, from fertilization to hatching, without eating. They also carry the juveniles in times of perceived danger, using specialized behavioural signals to call her young back into her mouth. That is what I can dedicated parenting!

Q: Bloat, the pufferfish, claims there are “4,800 teeth” between the 3 sharks Marlin had encountered- is that accurate?

A: Based on their animated appearance, there is a great white, a mako, and a great hammerhead. Assuming that is the case and they are all full-developed adults, we can make the following estimate: 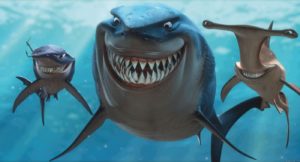 Data on the odontology of mako sharks was harder to find, but I think it is safe to safe that it will not fair  make up the >4,000 teeth difference needed to match the statement.

Bloat was just exaggerating a bit, and who can blame him? There are certainly enough teeth to be afraid. 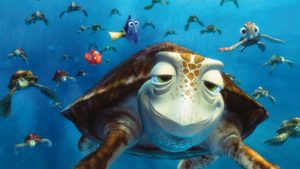 A: Yes, the EAC actually is a really thing, even if it isn’t used for thrill-seeking by surfer sea turtles. It’s actually a really influential current as well, moving warm water down the eastern coastline of Australia. It is the largest ocean current near Australia, and according to data from NASA and CSIRO Marine Research, moves as much as “30 million cubic meters of water per second in a path that is as large as 100 kilometers in width and 500 meters deep”. Pretty gnarly surfing! 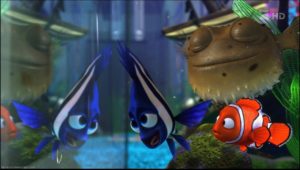 Q: Are Flo and Deb an accurate representation of self-awareness in fish? Can fish pass the mirror test?

A: The mirror test is the ability for an organism to recognize itself in a mirror. It is a way to get an organism’s self-awareness and consciousness. In Finding Nemo, the character Flo acknowledges her reflection as a separate being, Deb. This raises the question; are fish are able to pass the mirror test? While there are no sources on the specific type of fish Deb is, a PLOS report records that ¾ fish tested on were able to pass the mirror test after being accustomed to it. Sorry Deb… 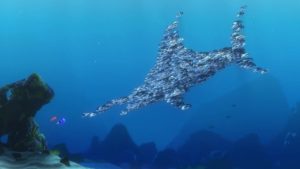 Q: In the movie, a school of fish makes impressions and formations to comfort Dory. How do fish really coordinate school movement?

A: Fish coordination is actually a super fascinating area of research, and while, they might not be making improv impressions underwater, many fish can make some impressively complex movements. There are two distinct types of movement, shoaling, and schooling; shoaling is less structured, more, temporary, and can be a loose aggregation of fish of differing species, while schooling is highly structured, with common directionality and coordinated movements. While we don’t understand the exact mechanisms of how some of the really complicated movements work, we do know that fish have a unique sensory system to allow for this behavior. In addition to using their vision, they have a lateral line, an extremely sensitive mechanosensory organ along the sides of the body that helps detect any changes in water pressure around them, helping them keep track of the movements of their neighbors precisely.

Despite the whale speaking, seagull-mocking silliness that is Finding Nemo, we think it does a good job overall presenting some of the fascinating science that happens under the sea. Golf claps all around!

“How Many Teeth Does a Hammerhead Shark Have?” Reference, IAC Publishing, www.reference.com/pets-animals/many-teeth-hammerhead-shark-6cb321753fe81324.

Fair Use Statement: On the Utilization of Pixar Clips and Images in the Article

This site may contain copyrighted material the use of which has not always been specifically authorized by the copyright owner. We are making such material available in an effort to advance understanding of environmental, political, human rights, economic, democracy, scientific, and social justice issues, etc. we believe this constitutes a ‘fair use’ of any such copyrighted material as provided for in section 107 of the US Copyright Law.

In accordance with Title 17 U.S.C. Section 107, the material on this site is distributed without profit to those who have expressed a prior interest in receiving the included information for research and educational purposes. For more information go to: http://www.law.cornell.edu/uscode/17/107.shtml