More
Articles today i learned (til) Mum’s the Word

When most people think of mummies, a strange mixture of ancient curses and toilet paper-wrapped Halloween costumes come to mind. It comes as no surprise that the concept of mummies is linked to the magical and superstitious- after all; it is pretty unbelievable to see intact bodies that are 2,000 years old. How could you not think of zombies or ghosts?

Like all mysteries, however, mummies actually have a scientific explanation. 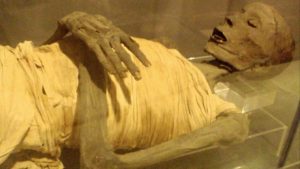 Human bodies decay and break down by two major mechanisms: autolysis and putrefaction. Autolysis is essentially a self-destructive process during which enzymes that typically aid in digestion begin to digest the body itself. After this, putrefaction begins when bacteria from the body’s flora or the surrounding environment start to break down the organic matter for their own nutrition, leading to the decomposition of the corpse. The bacteria introduce additional enzymes that continue the liquefaction, and eventually, the body will attract flies and scavengers that can feed on the remains. In order to effectively preserve a body, these processes must be interrupted, or at least slowed significantly. There are several known factors that can do just that:

I hope you found this interesting, and good luck with those linens!