I had the privilege to interview Biju Parakkeden; one of the co-creators of Legend of Sumeria, a thrilling new sci-fi graphic novel. Biju is a professor of bioengineering, and along with co-creator Jay Webb, and many of their illustrators,  they brought to life their views of modern development in science and how a possible future may play out.

Ok, so a good place to start off would be a summary. For someone unfamiliar with Legend of Sumeria what would you tell them?

A brief summary: Sumeria asks the question of what happens to society if powerful technology gets into the wrong hands. We use real science to dramatize current events so that readers understand that the innovations of today can potentially be the source of our own demise, without ethical and moral guidance by the public.

Why did you decide to take on this project? How was the idea created?

It started as a fun exploration of the question, what would happen to society if there was a cure-all treatment for the one thing that provides evolutionary pressure on the human species: infectious disease. With the help of Jay, who has experience with film production, we broadened the story greatly and made a set of characters with relatable struggles as they navigate through this alternate reality where technologies (especially genetic technologies) have become extremely pervasive. We hope it can spur public discussion about the ethics of these futuristic projects before they really become engrained in society by the might of those who are pushing these limits.

In that initial phase, did you have a target audience? If so how did that shape your decisions?

We wanted to target scientists and cerebral readers given the topics. These folks are inherently visual learners and are embracing the story. Moreover, we are finding great enthusiasm from the bioethics and philosophy community and this looks like a great niche for us to be.

What were some of the challenges in communicating science in this art form?

We wanted to balance real science with something that was understandable to a non-scientific audience. In many cases there were story arcs that needed a scientific theory to drive it and we couldn’t come up with a viable theory then we moved on. We really wanted to stay true to the science as much as possible and not provide fluff.

How did your partnership with Jay Webb come about, and how was that collaboration?

Jay and I are best friends and have always written creatively though independently. This was our first venture together and his contribution really enriched the story and characters with a unique world view and exciting plot twists that I myself did not have experience in. I balanced his artistic vision with instilling modern, current events on the technology side and we had many great discussions to marry the two in a narrative way. 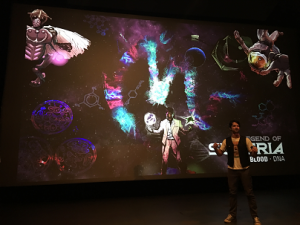 What are your thoughts on educating others in this way? (In regards to communicating science)

We are highly motivated to work with other professors and scientists to take this concept of making science fiction and embed it within educational programs. I continue to be encouraged by the interest in the bioethics community to use this approach as a tool to introduce a bioethics case for students to then discuss in class. There are clearly a lot of creative scientists out there and we would like to support them with a professional illustration and narration team to have their stories come to life through partnering with Dream Novels LLC, our publishing entity.

Was there anything you had to exclude, or what was your process in deciding what should/should not be included?

We excluded areas that were not supported by a viable scientific theory. Furthermore, we tried to not alienate any group and created a diverse set of characters to be inclusive of all. These technologies and diseases in our story are agnostic to race, creed, or religion so we made sure that we showed how many backgrounds reacted to this new society.

Absolutely, many are rooted in real technologies of today. I think the benefit of science fiction is that it enables creativity to really broaden what is possible. In many ways, it is the starting point of many the projects in my lab that start with a “sci-fi” idea and then reduce it to practice through a series of experiments. 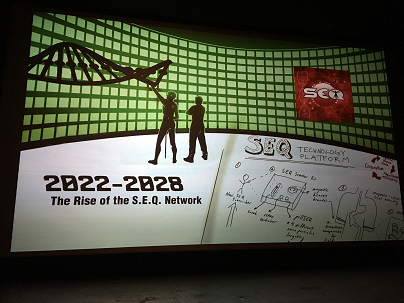 In your opinion, what is the future of using art or other creative media as a way to communicate and educate others about science?

I strongly believe that artists and scientists should come together more to communicate complex ideas. By their nature, artists are story tellers in ways that spark an emotional response in their audience and I feel the science community can benefit from this fact rather than purely a factual presentation that lacks that human touch.

Do you have any future plans? (Another graphic novel or a follow up to Legend of Sumeria)

This first book is one of a trilogy. Once we understand our fan base, we are excited to do the next book hopefully with the support of a large publishing group who recognizes the opportunity here.

What is the main concept you would want your audience to take away from Legend of Sumeria?

Before asking “can I do this?”, be mindful and first ask “should we do this?”

Parakkeden advises individuals in science-based fields to find new and inventive ways to communicate information. Zyndo, a product he developed, displays an augmented digital reality of the book. Parakkeden and Webb’s work shows the potential of science being communicated effectively to the mainstream, and hopefully inspiring people to learn more about the subject.