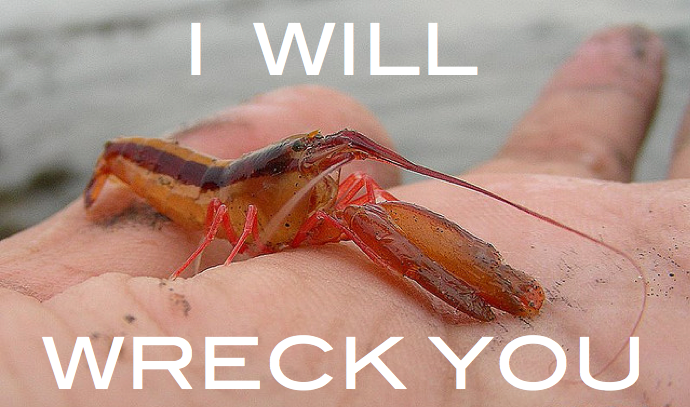 “Wtf, shrimp!!? I make it all the way to this website from who knows what part of the internet, and I see ‘Badass Biology’. Man, Kevin, you flip my brain out with possibilities of flying sharks, rabbits of doom, or a half-honeybee half-unicorn rainbow pollinators. And what do you deliver? A stupid shrimp??! I hate you, and I quit this website. (╯°□°）╯︵ ┻━┻)” To which I reply, “Charles Barkley, I think you’re over-reacting. Please repair my table at once”.

Yes, it’s a shrimp. A measly two-inch-long shrimp. But you don’t understand. This one single stupid shrimp is just about the coolest thing I’ve ever heard. Trust me, and when you hear one too, you’ll probably go deaf, because this one little shrimp IS ONE OF THE LOUDEST ORGANISMS ON THE PLANET. I’m talking 220+ decibels, much louder than a gunshot and louder than standing next to a jet engine at take-off. O_o.

First, I want to talk about some other wicked cool stuff this little guy does apart from being a tiny walking firework of sonic pain. These shrimp garner lots of attention from ecologists because of their symbiotic, or mutually-beneficial, relationship with gobies, a type of small marine fish. The coral reef populations of this shrimp build burrows and recruit the help of a goby to stand guard out front while being no more than an antennae’s distance from the shrimp, using the goby’s well-developed vision to watch for danger. Once danger comes, the goby flicks its tail to signal a threat, and both the goby and the shrimp retreat into the same burrow. Then they start slapping five. It’s flippin sweet.

From an ecologist’s point of view, this is totally mutualistic, and some scientific literature lists this interaction as “totally f-ing amazing” [citation needed] (Good luck with finding THAT reference -ed.). Yeah, both the goby and the shrimp live to see another day should a shark, barracuda, squid, rogue buoy, really fast snail, very-misplaced land predator, sinking boat part, cloud of wasps, or sentient shrimp-hating spear come around to threaten them. The goby gets a burrow, and the pistol shrimp gets a gargoyle. Selection at work.

I like to think of the goby as the pistol shrimp’s pet, kinda like me buying a falcon and parading it around the neighborhood on a leash. And once danger comes, the falcon goes “Hey yo, Kevo, you might need to reconsider this route”, we split, we don’t find danger, and I buy the falcon ribs for a job well done (and because I really want ribs right now). So in a sense, pistol shrimp are danger shepherds equipped with sun-blasting cannons of glory that we’ll get to in a moment.

I need to take a break to collect myself. Holy balls, these shrimp own everything own-able. Next time I see one, I’m buying it ribs. The whole rack.

Let’s get to that “pistol” thing, why don’t we? Pistol shrimp have one very distinct set of front appendages, like two arms extending outwards from its body. Only, one of these arms is disproportionately larger than the other, and it’s quite a contrast. Like no foolin’ man, this one arm alone can be as long as half the entire length of the shrimp’s body. Imagine walking around with one of your arms the size of the Hulk’s and you get the idea. This may look pretty stupid, but this powerful musculature operates one of the most badass weapons nature can offer.

When in serious danger or when hunting, the pistol shrimp cocks its massive claw backwards into a 90o position. Once the claw snaps shut, it produces a jet of water propelled forward at 60mph. Yeah, woo, a fast water jet. Big deal. But here’s the amazing part. Are you ready to have your mind blown? If you have ever listened to me before, now is a pretty good time, too: This jet of water creates a bubble that cavitates, or implodes, generating a pressure wave that creates a sound loud enough to break glass in an instant. Not only that, but once the bubble cavitates, the heat generated by the force of the implosion causes the temperatures inside the bubble to reach about 18,000 degrees Fahrenheit. Yes. Eighteen. Thousand. Oh, and to top it off, the whole process takes three tenths of a second.

THIS TINY SHRIMP MAKES A BUBBLE SO AWESOME THAT IT’S LOUDER THAN A JET AND MORE THAN TWICE AS HOT AS THE SURFACE OF THE SUN.

You can imagine the horribly bubbly doom the pistol shrimp’s enemies must face. Stunned (or killed) by the force of that kind of pressure change, the pistol shrimp’s prey has basically just become lunch in an instant. The shrimp pulls its quarry into its burrow, and goes to town, just how I could go to town on some ribs right about now. I dug up a video about this whole process in case what I said wasn’t convincing enough:

If you want me to write about any other badass biological bosses, leave a comment. I may talk about them, or I may just tell you that your suggestions are awful. Probably not the latter though. I like people.

Well, I like most people except you, Charles Barkley. I really miss that table. Now I’ve got nothing to rest my wine on when Glee’s on.