More
Articles vintage science Even though Kim Kardashian’s marriage didn’t last, her engagement ring will. Like... 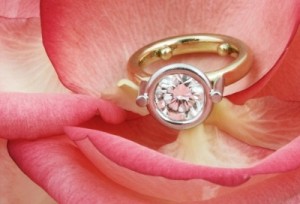 I have a joke for you:

How long does a two million dollar engagement ring buy you with everyone’s favorite (well, mine anyways) Kardashian sister?

As Kris Humphries found out, about 72 days.

Sorry Kris, but at least you should take some comfort in the fact that the ring you gave Kim will sit as shiny as it is right now until it’s ready to win hearts and headlines once again. At least the platinum band will anyways. What I’m referring to as the simply staggering resistance of Platinum to oxidation, more commonly known as rust or tarnish.  Platinum, along with gold and to a lesser extent silver are  the only metals on the periodic table that enjoy this distinction. As a logical consequence, these metals were some of the first discovered by ancient peoples because they would have quite literally been found lying on the ground, super shiny. In fact, gold was the first metal discovered ever and goes back as far as the entire history of… well as far back as recorded history itself! I like to imagine when cavemen discovered gold they tried to eat it before proposing to cave ladies with chunks of the stuff. Given that these un-reactive metals are now relatively commonplace, the idea of a metal that doesn’t rust may not seem that cool but trust me, it is.

So why aren’t these magical metals applied to more commonplace items where rust is a concern? The obvious answer is their astronomical expense. Unfortunately the expense of platinum, gold and silver is not because they don’t rust but because they are super rare, representing some of the rarest elements found it the earths crust. Even if they were more common, each of these metals are extremely ductile and malleable allowing them to be easily fashioned through pulling and hammering into jewelry but preventing their use as structural metals. Gold’s softness is the origin of the quintessential gold rush miner biting into a dubious coin to ensure it’s authenticity. Thus even if you wanted to and were rich and crazy enough to do so, it would be unwise to make solid gold or platinum rims because they would buckle when popping over a curb.

The diamonds in Kim’s ring are another story. Formed from carbon under extreme conditions of huge temperatures and pressures, diamonds are chemically identical to pencil lead but differ in the way the atoms are arranged. Instead of being soft enough to smear onto a sheet of paper when pressed by hand, diamonds are the hardest naturally occurring substance on earth. Ironically, according to calculations using thermodynamics, a discipline used to determine the equilibrium structure for a given set of conditions and composition, diamonds should not even exist outside of the extreme conditions in which they are formed! Instead, thermodynamics predicts that diamonds should deteriorate to graphite (pencil lead) at the temperatures and pressures found around Kim Kardashian’s hand. Then why don’t they?

To answer that we can consider again our friends platinum and gold. It is not exactly correct to say that these metals can never oxidize, but more accurate to say that without a huge input of energy they never will. Meanwhile, metals like iron actually give off some energy when they rust. From the standpoint of iron, it is energetically favorable to rust than remain as elemental iron in the presence of oxygen. A good analogy to this kind of “favorable energetics” is a cart balanced at the top of a hill – the cart has potential energy that is converted to kinetic energy and then depleted  when it rolls down the hill. An unfavorable energy case would be a cart in a deep valley. Even though the cart could reach the top of the hill, someone would have to push it up there. Maybe you could get those cavemen to do it by feeding them gold. To transform diamonds into graphite and oxidize platinum will take energy. Lots of energy. So unless Kim visits the National Ignition Facility, an active volcano or these guys, her ring is staying put. Just maybe not on her finger.