More
Articles today i learned (til) Hey Kids: Brush your teeth, stay in school… and read the citations! 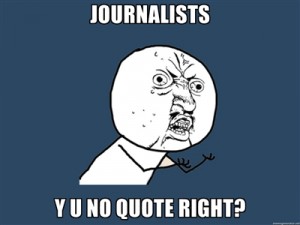 A co-worker sent this out to our research group in a rare moment of light-heartedness in the otherwise all-work-no-play world of physical chemistry research. His take was that we, as disseminators of scientific research, must be careful not to mislead the impressionable public. My take, which is admittedly more jaded, was that once again non-science media cannot be trusted to re-interpret the work of specialists. Of course a certain amount of external scrutinizing is required to keep we the bespectacled on the straight and narrow, otherwise we’d be spending all our grant money on Ferraris and replica iron man suits, but I’d like to imagine there is a happy medium between the far-fetched interpretations of science and technology that leave people feeling short changed  and some legitimately useful marriage of cutting edge scientific research and mass media.

While trolling the interwebs for humorous tie-ins to this article, I came across a few pieces on the topic of science journalism written by Ananyo Bhattacharya, the online editor for Nature magazine, who in his own words has turned to the “dark side” of journalism after getting a PhD in physics and working as a researcher. Dark side is right, considering his views on the role of journalists covering science is basically that they have zero obligation to accurately portray scientific research as long as no explicit lies are told. I was particularly dumbfounded on his take regarding a concept of “copy-checking”.  Considering I am not a famous enough scientist to have articles written about my research I had never heard of copy-checking, but the basic idea is that journalists should not allow the scientists who they are writing about to preview their articles before submission. Ostensibly, this is to prevent scientists from doctoring the article to shed a more favorable light on their work, which I guess is an institutional convention for journalists to prevent politicians or other public figures from massaging press releases. That’s all well and good, but considering scientific researchers are supposed to be following rigorous ethical guidelines anyways, especially regarding publications and authorship, this seems to be a superfluous condition. Nature publishing group (who employs the journalist mentioned above) explicitly states the following regarding the requirements of authors.

“Submission to a Nature journal is taken by the journal to mean that all the listed authors have agreed all of the contents.”

That is to say, if your name appears on the work you are tacitly vouching for its content. Why the same consideration should not be extended to “non-scientific” reporting of research results I don’t know, but I digress. There is a simple solution to the ancient struggle between science and the media: read the references yourself. If you ever find yourself in the strange land of pseudo-scientific explanations or questionable presentation of the latest research, quit while you’re ahead and go straight to the source of the research being reported. Presumably even bad science journalism should cite the source of their topics, maybe even including the title of a research publication. A quick search in your favorite internet search engine will usually take you straight to the desired publication, and if you’re on a college campus you can probably even access the entire article gratis. Even reading the abstract (a brief overview of the research methods and findings used in the article) can go a long way in telling you with how much vigor you should roll your eyes.

But what possible consequence could bad reporting of scientific research have? In some of the most esoteric research areas I’d say very little. For example, when the research occurring at the CERN Large Hadron Collider is misrepresented or even completely wrong in a news report, likely only the most familiar with their research (that excludes me!) would ever notice. Meanwhile, a piece on climate change with an appropriately alluring title might encourage residents of southern Florida to head for the hills. Medical research may be the one exception in which media claims are taken with a grain of salt, maybe because they’ve got this guy who makes this article feel a little redundant, but I’ll just tell myself we’re on the same team.

Bottom line: you owe it to yourself as an inquisitive person (you ARE reading Charged Magazine after all) to apply a healthy dose of skepticism to any scientific report or study. The whole point of science after all is not to persuade with vagaries, but to convince with facts.