More
Articles diy Zinc has bigger game than you do 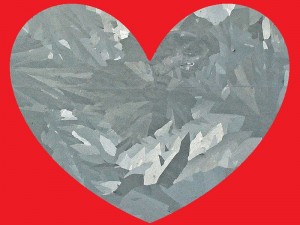 Still struggling to pick out that one in a million Valentine’s Day gift? Worry no longer, because I have the perfect gift idea sure to make anyone melt. No – it’s not superhot plasma from your favorite star gone supernova (the Biebs?) – We’re talking zinc baby. Baby. Baby. Baby. Oh baby.

Zinc coatings on steel to be exact, through the process of “hot dip” galvanization.  The hot dip part is literal – pieces of steel are dunked in a bath of molten zinc metal and when they are removed a thin layer of zinc is atomically attached to the surface of the steel. The “galvanized” part belies the true function of the coating, considering this word is derived from a certain Italian who took liberties with dead frogs.

“Why bother?” Your significant other may ask.  “Here I had this nice piece of steel and now you’ve gone and hot dipped it. I think we’re at two different places in our relationship.” We’ve all been there.

The role of the zinc is to protect the iron in iron alloys (most importantly steel) from rusting. Like a proverbial knight in shining (preferably hot dipped) armor, zinc prevents the steel from rusting by selflessly doing all the rusting itself. As I describe it, this is starting to sound a lot less romantic and more like zinc has wandered into the friend-zone. Poor zinc.

If you read my last article, you know that natural corrosion resistance is rare among the elements, but ironically zinc protects steel by being less good at resisting the undesirable reactions with oxygen and water that cause the formation of rust on steel. A good analogy for this process is if both zinc and iron open lemonade stands on the same block and oxygen is the customer. Every time iron is trying to seal the deal zinc unleashes a humorous ad campaign and slashes their prices, so naturally oxygen buys lemonade from zinc instead. Now replace lemonade with electrons and you’ve got a half-decent understanding of how zinc does its job – as far as oxygen is concerned it came to this two bit lemonade town to buy lemonade from somebody (form an atomic bond), and zinc sure is looking pretty good right now. The only discrepancy with this analogy is that in the business world iron would have to resort to foul play and steal all of zinc’s lemons or deface their billboards or something. Probably shouldn’t write that on your next chemistry exam though. But don’t feel bad for zinc – the corrosion products of zinc with the environment (zinc oxide and zinc carbonate), actually prevent continued corrosion of the underlying zinc. This is called “passivation” which is the way that many other metals, like aluminum, avoid needing a hot dip.

So we’ve covered the “from the heart” part of a good V-day gift, but a box of galvanized nails might not send the right message to the apple of your eye. The good news is hot-dip galvanized steel looks really cool. The next time you’re passing a guard rail, street light pole or the like, you might notice a kind of patchwork series of flecks on the surface of the steel. No, that’s not art deco, those are the macro-sized crystalline grains of zinc busy oxidizing away. You can see some of these flecks inside the heart at the beginning of this article. In fact, all metals crystallize in this way, but because of how the zinc coating is applied the crystals of zinc that form on the surface of the steel are able to grow very large. If you were to take a high powered microscope and have a look at the surface of un-galvanized steel you would see a very similar grain structure but about 1000 times smaller. A good example is shown below from the Flikr photostream by the department of engineering at the University of Cambridge –  I admit I am a little jealous at all the cool science photos they have. Do yourself a favor and check them out.  The grains in this image are about 30-50 micrometers, which is about half the width of a human hair. 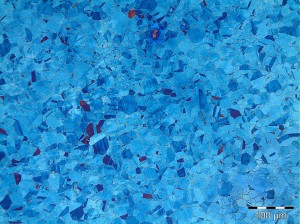 Normally the grain size in so called “engineering materials” like steel is intentionally kept very small because it improves strength. Zinc, whose only role is as a sacrificial coating, can flaunt its’ big ole’ grains. The only other example I can think of where crystal grains are visible like this is in polycrystalline silicon solar cells. The fact that all three of these materials have the same general appearance is not by chance, but more on that another time.

If love is sacrifice, then zinc has got it down. I will close with a poem that you can use with your gift:

Rust is red too,

A coating of zinc,

And don’t I just.