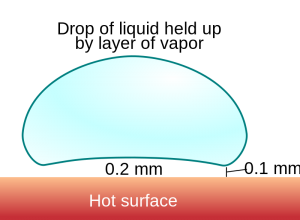 If you’ve ever taken a life sciences course your teacher probably mentioned one of several properties that make water particularly interesting. Water is cohesive meaning it sticks to itself, adhesive meaning it sticks to other things (superhydrophobic surfaces notwithstanding), and is considered the “universal solvent” because it readily dissolves many other substances. These properties are some of the most critical that allow water to function as the key to most terrestrial forms of life. Another interesting fact about water is that it is one of the few substances that exists in all three states of matter (solid, liquid and gas) in fairly non-extreme locals on earth. Furthermore, these phases exist within a relatively narrow range of temperatures – the entire transformation from solid to gas spans only 100 degrees Celsius (from melting of ice at 0 °C to boiling of liquid water at 100 °C). Compare that to ethyl alcohol (the alcohol in “alcoholic” beverages) which solidifies at -114 °C  and boils at 78 °C (a range of only about 200 °C, but with freezing occurring at a temperature below the coldest temperature ever recorded on earth) or a pure metal like iron with a melting temperature of 1538 °C and boiling temperature of 2862 °C  – that’s a phase range of over 1000 °C!

It is important at this point in my introduction to define a phase: a phase is one of several atomic or molecular configurations for a given composition. When considering melting and boiling points, we are observing only the transition between the three states of matter mentioned above, however it is equally correct to consider multiple crystal structures for one composition of solid as different phases. Some of these solid phases are not easily distinguishable without sophisticated analytical techniques, while others have characteristic changes in physical properties.  No one would confuse graphite and diamond though they are in fact different phases of the same element. Plasma, also known as a superheated gas, is considered a fourth phase of matter but not one normally observed in nature with a notable exception being bolts of lightning. However, when heated to the point of being a plasma the atoms defining a given composition become ionized and for this reason plasma is normally considered separate from the more conventional states of matter. Fun fact for gamers: this is the plasma in all your favorite late game super-weapons.

This is where things get weird for our old friend agua.

1) Two identical pans are pre-heated to temperatures above the boiling point of water. The first pan is heated to 150 °C and the second pan to 300 °C. If drops of water at room temperature are placed into each pan, which drop will undergo the phase change from liquid to gas (boil) first?

2) Two identical containers of water (same volume, same container size and material) are placed into a freezer. One container contains water at just below its’ boiling point (< 100 °C) and the other at roughly room temperature (21 °C). Which will freeze first?

If considering only the energetics of each scenario, the logical conclusion is that a higher temperature pan means faster boiling, and a lower starting temperature means faster solidification. But if you were to perform these exact experiments at home (which I hope you do!) the opposite would occur.

So whats going on? Is water playing by the rules (of thermodynamics)? Fortunately for us, Gibbs will remain stationary in his grave. As it turns out, both of these scenarios are good examples of how the properties of matter can change dramatically after a phase change. In both of these cases, variations in heat transfer between phases is likely to blame.

For the water in the pan scenario, there exists a temperature above which water is so quickly vaporized upon hitting the pan a thin layer of steam is trapped below the liquid droplet, causing it to literally levitate above the surface of the pan on cushion of water vapor. Think air hockey table, but droplets of boiling water replacing the plastic puck. This temperature is called the “Leidenfrost point”, which according to unreferenced figure from Wikipedia is about 200 °C. Steam has a thermal conductivity roughly 10-100 times lower than that of liquid water depending on the temperature. In an idealized example, thermal conductivity is a measure of how easily a quantity of heat in a high temperature region can travel from one side of a 100% dense (no porosity) slab of material to the other. Thermal conductivity has units of energy per length per degree per second (Joules/(meter*°C*seconds)), meaning for a fixed length and temperature a material with lower thermal conductivity will take more time than a material with higher thermal conductivity to transfer the same amount of energy.

You may have heard of ole’ Leidenfrost’s namesake before associated with dipping things (namely one’s hand) into boiling lead after placing it in water. The Myth Busters did it after significant deliberation and preliminary testing, but somehow the alpha geeks at PopSci seemed to think it would make a good “DIY” project. I have to say, I can understand why dipping digits is the sexier version of the Leidenfrost effect demonstration, but the pan + water trick seems a little less invasive. In their defense, PopSci also covered this demo and the equivalent effect with boiling Nitrogen instead of steam as well.

However you plan to enjoy the Leidenfrost effect, do so under proper supervision and be careful.

Check out part 2 for a discussion on the second scenario!