Here are a few of the memes I made throughout the semester for BIOS 4607, Molecular Biology of Microbes, taught by Dr. Brian Hammer. At the risk of making these worse, I have provided a brief explanation under each meme. 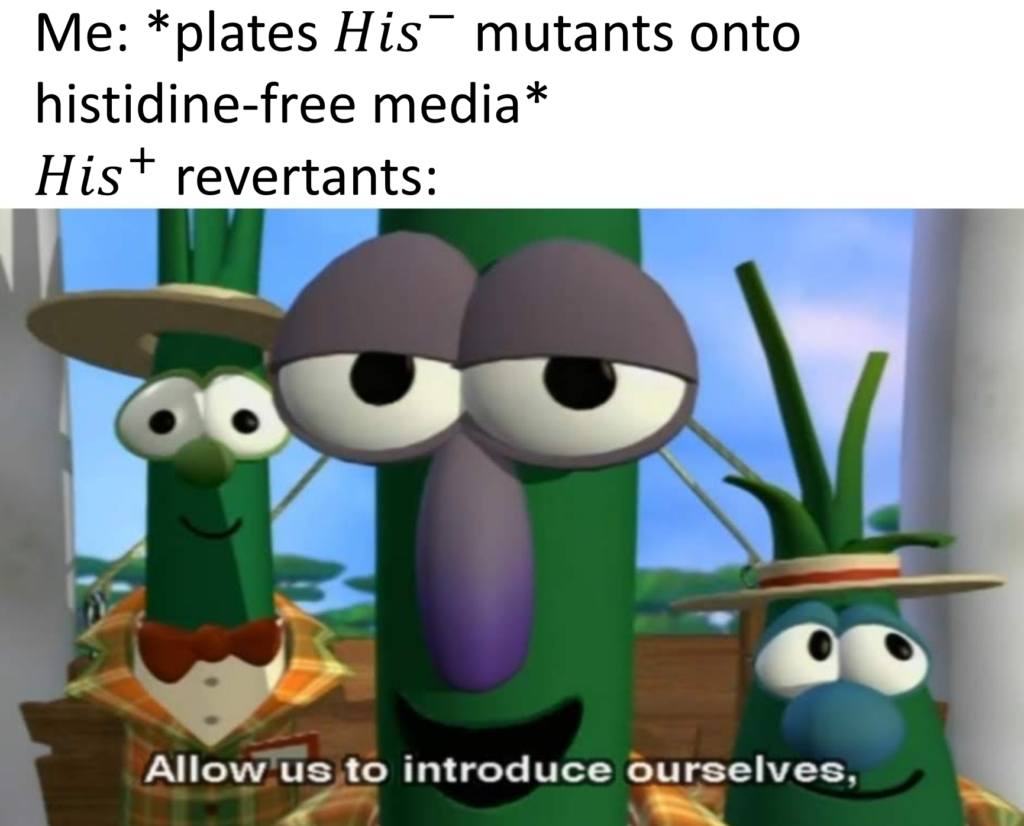 An auxotrophic mutant is one which has a mutation in a gene that produces an essential product for the organism. If the organism is plated onto media with the required substance, auxotrophs will be able to grow. A common example of this phenomenon are histidine mutants, denoted His-, which are unable to synthesize the amino acid histidine. Because histidine is essential for growth, this means that the His- mutants will only grow on media with histidine. However, by streaking auxotrophic colonies onto limiting media—in this case, media lacking histidine—the only mutants that will grow are those which somehow reverted back to a histidine-producing state. For example, if the auxotrophs were unable to produce a histidine due to a nonsense mutation—one which causes ribosomes to halt translation prematurely and is often the result of a single nucleotide change—reversal in one of the descendants of the mutant will be quite likely. However, these revertants will only be apparent once their His- friends are dead as a result of selecting against them. 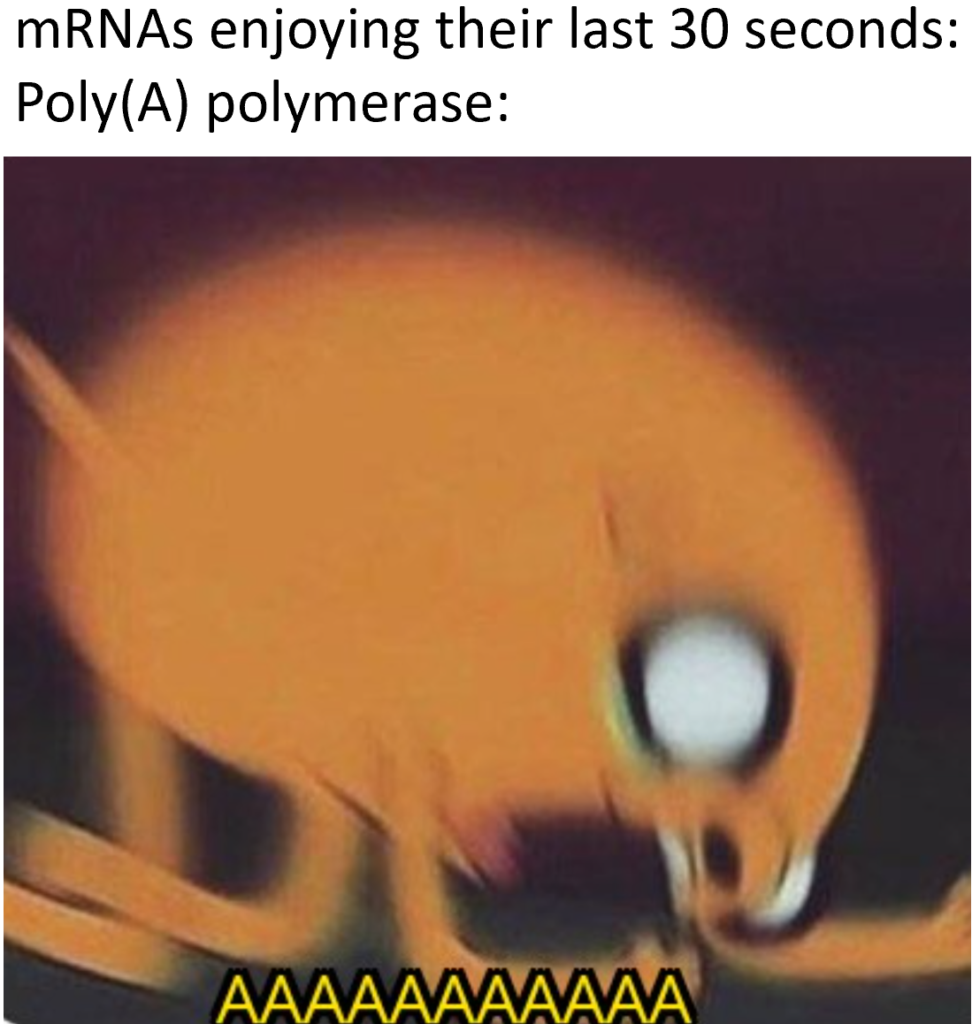 Messenger RNA, or mRNA, is transcribed from DNA by RNA polymerase. The strand of mRNA is then used by ribosomes, which move along the mRNA from its 5′ end to its 3′ end as they build proteins. RNA often has secondary structures, which form when the RNA loops around and binds to itself. These patterns can be quite intricate and sometimes result in complex molecules such as enzymes, which are called ribozymes when made out of RNA. With regards to ribosomes (which are themselves partially made out of ribozymes and other types of RNA), loops which form at the 3′ end of the mRNA help knock the ribosome off the strand, at which point it will be degraded by enzymes called exoribonucleases. One enzyme which assists in this process is polyadenylate polymerase, which adds lots of adenine (A) to the end of the mRNA to allow exoribonucleases to digest the strand properly. 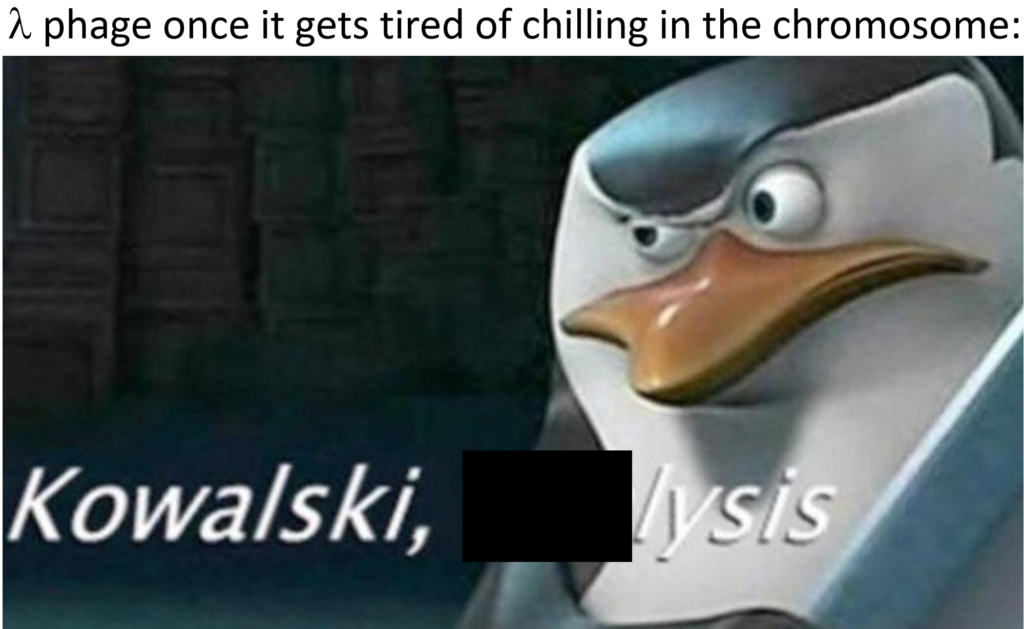 This is a play on the famous “Kowalski, analysis” meme. Lambda phage is a well-studied bacterial pathogen which, instead of replicating upon arrival in its microbial host, integrates itself into the chromosome, where it may stay indefinitely. Naturally, the virus does not decide to leave its host once it gets tired of “chilling;” rather, it is typically induced to exit its host by stressful conditions such as exposure to ultraviolet light. 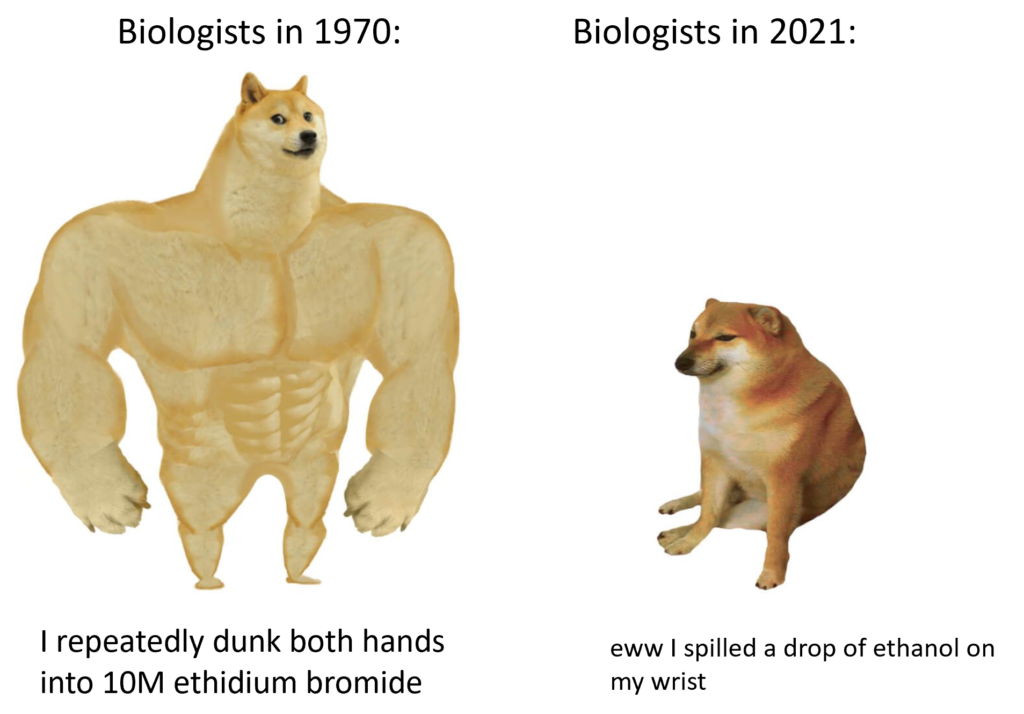 This meme was the result of a comment my professor made about how when he was a student in the 70s, he knew academics who would use their bare hands to pull electrophoresis gels out of solutions with ethidium bromide, a highly toxic mutagen. In general, safety protocols have improved significantly over the last century, to the point where certain practices seem like jokes today; for example, chemists using their mouths and a hose to pipette dangerous chemicals. Another famous example is the discovery of phenylthiocarbamide, a chemical which only certain humans can taste. This discovery was made when the chemist studying it accidentally spilled some powder into the air and tasted nothing, whereas his nearby colleague told him that whatever he was working with tasted disgusting. Because it was common to taste chemicals at the time, the chemist brought the powder to various people to see who could taste it and who could not. Fortunately, the compound isn’t terribly toxic at usual doses, though nowadays I doubt the scientific community would be so nonchalant about a scientist casually testing a chemical on civilians.