CRISPR, an anacronym that stands for “clustered regularly interspaced short palindromic repeats,” is a concept becoming quite ubiquitous in most biology classes and rapidly gaining familiarity among experimental medicine and biology discussion circles not to mention scientific publications and health- or science-related news media. However, people who are not closely following these discussions or do not have a contemporary knowledge of genetics, understand very little about what exactly CRISPR could be or do. Even if one goes word by word for what each letter of the CRISPR anacronym stands for, it would be hard for the general public to have a workable idea of the science underlying this term. This article intends to provide an uncomplicate explanation of the concepts around CRISPR by resorting to a language that simplifies the ideas without decreasing the accuracy to the main concepts. 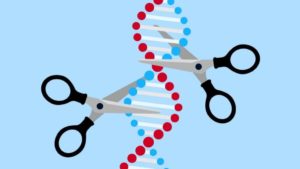 First, we may need to distinguish CRISPR, as a family of DNA sequences which is part of the immune system identified in bacteria cells, from CRISPR technology, as a tool to modify those DNA sequences in humans. Therefore, when scientists are talking about CRISPR and “trials in humans” they usually refer to a method used to modify the DNA genome in humans.

CRISPR has two components: the Cas9 which is a protein that can unwind and cut DNA sequences and the guide RNA (or gRNA) that recognizes the sequence of specific sequence of DNA to be edited.  In some literature the CRISPR technology is also known as CRISPR/Cas9 in reference to a specific cutting protein – we will return to this concept below.

At least, three important questions arise here: How well is our understanding of the DNA sequences in cells? How well developed and precise are the tools to manipulate those DNA sequences? Why do we need to modify any part of the DNA sequences? The first two questions are not only quite related, but also involve a lot of uncertainty even for scientist working everyday with CRISPR technology. The third question involves not only the diverse therapies and diagnostic purposes for which CRISPR technology is being used but also the dangers and ethical dilemmas involved in the use of this technology. We will mostly focus on the third question while bearing in mind and revisiting the first two questions. 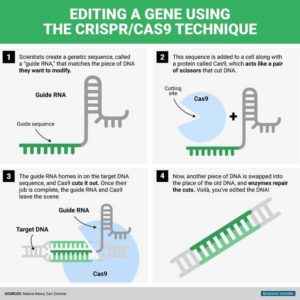 CRISPR is a system mostly known for the modification of DNA sequences to correct or delete any mutations or defect within the sequence of spaced DNA palindrome. In a practical way, it could be seen as spellcheckers of misspelled sequences and a cut-and-paste tool for DNA editing.  CRISPR has been used in cancer patients, people with blood disorder and other possible diseases or defects that CRISPR could help to identify and correct.

To have a more precise idea lets return to the underlying concepts once more. The purpose of CRISPR technology is first to identify genes associated with CRISPR.  Particularly relevant are those genes that could produce enzymes or proteins named Cris9 which are able to unwind and cut DNA, which were identified in the laboratories of Jennifer Doudna and Emmanuelle Charpentier and for which they received the Nobel Prize in Medicine.

With Cris9 at hand, it could be used to unwind and cut out specific strands of DNA (mostly those parts of the human genome that were previously identified as the mutations that cause unwanted defects or health problems). At that point, a specific gRNA is created to match that stretch of the DNA sequence that was cut.  Next, after the gRNA is being attached to the DNA cutting enzyme Cas9, the complex formed by the Cas9 and gRNA is re-introduced to the targeted cell where the defect was detected.  In other words, the enzyme cuts the strands of DNA at the specific human genome so that whatever is deleted can be properly replaced by a corrected part. In this case, researchers would remove some cells that are susceptible to a bacteria or virus or cells that show some unwanted mutation, modify the DNA in those cells and then put the modified cells back to potentially decrease the likelihood of a disease or defect.

In general, CRISPR has been associated with a scientific revolution happening in medicine that would soon help us to better fight diseases, cure cancer, diagnose diseases or maybe even create new humans. The increasing understanding of how CRISPR works has given some hope and enthusiasm to scientist.  Therefore, it is now frequent to find news about CRISPR being used in experiments.

However, we are in the early days of CRISPR and the progress is slow.  In spite of the hopes, CRISPR has been used solely in a limited number of well-known mutations that cause certain diseases. This is an important limitation for various reasons. The number of unknown mutations is still quite large compared to the few known ones.  Moreover, the mutations in the same place of the sequence of DNA of two individuals could be quite different and therefore the application of CRISPR to cut and correct such a mutation may work in some but not in all individuals. Even in the cases where the application of CRISPR in experiments with animals were relatively successful, for example the injection of corrected stem cells that let paralyzed rats walk again, when the same experiments were run in humans, they did not provide the same results.

The slow progress has not stopped the development of theoretical and laboratory models where CRISPR could be use beyond unwinding and cutting DNA, but also as a pointer and diagnostic tool. In the future, it is expected that CRISPR could be used in developing advanced patient therapies, customized medications and even cure life-long inherited diseases.

However, when CRISPR is associated with the “trials in humans,” a number of natural legitimate ethical concerns have been risen around the use of CRISPR.  For example, it has become accepted the use in CRISPR in somatic cells such as T-cells to treat diseases, but when CRISPR is used in embryo or stem cells, it becomes controversial, mainly because genome modifications are done at germline level with unknown of unintended consequences for patients and future generations.  In simple terms, the issue is the corrections at germline of a DNA sequence that could be passed to future generations by introducing heritable changes to sperm, eggs or embryos without full consideration of the risks or proper understanding of the participants.

This issue gained big relevance when a He Jiankui, a Chinese scientist, worked in the germline to modify the genes in twin kids (before birth), aimed to make the twins immune to HIV. This experiment was considered quite irresponsible and ethically questionable leading to a worldwide condemnation of the scientific community; the risks to the babies were higher than the benefits for a number of reasons: the parents provided consent without being properly informed, the CRISPR experiment was kept secret, He Jiankui ignored the ethical consensus against human germline genome editing. Due to this incident, regulations about when and how related research should be use in clinical treatment are being discussed and issued. Moreover, there have been even calls for a moratorium of clinical use of human germline editing.

Although still experimental, it is expected that one day CRISPR would arrive to the market. This creates another controversial set of issues. Who will have access to it? Would the cost be prohibitive for most people?  Would CRISPR be similar to many new cancer or other high-tech medications and therapies with quite expensive price tags? Would CRISPR be seen as a discrimination tool via the market? These are open questions with no simple answers.

Beyond the ethical concerns, people may tend, out of fear, to magnify some drawbacks and minimize important merits (or vice versa) and so, could be sensitive to rumors or unprecise information. That is the case of non-therapeutic uses of CRISPR. The idea that CRISPR could be used for frivolous ends (i.e., phenotype “corrections” like cosmetic surgery for aesthetics) is a frequent misconception about what CRISPR could do.  In general, it should be mentioned that the state of arts in genetics is not quite there yet to attempt any phenotype “correction.”  Simply put, science does not know exactly what the consequences are of changing some genes.

In conclusion, editing CRISPR genome allows scientists to quickly create cell, which can be used to accelerate research into diseases such as cancer and mental illness. Also, CRISPR is now being developed as a rapid diagnostic tool.  However, CRISPR is still in its early days of and there are still scientific and ethical limitations to take into consideration