More
Articles today i learned (til) When Citrus Gets Lethal 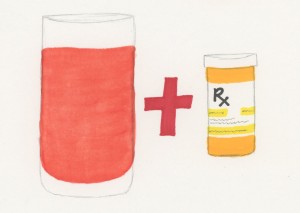 So, the other day I got a new prescription, and as I skimmed through the 300 pages of side effect warnings (okay… maybe it was only 3 pages, but the font was ridiculously tiny), I noticed a warning about consuming grapefruit and/or grapefruit juice. “Whaaat? Why grapefruit specifically?”

The warning is written as follows:

I figured this warning was probably specific to drugs similar to the one I’m taking (combination hormone birth control), so I just brushed it off and made a mental note to never drink grapefruit juice again. That is until I was watching TV a few hours later and a commercial for another prescription– one for bi-polar depression– had the same warning. “Seriously! What is up with freaking grapefruit?!?” The scientist in me was intrigued, so I decided to do some digging.

Apparently there are many drugs (85 that are known of so far) that have warnings against grapefruit consumption, including statins (for high cholesterol), anti-arrhythmics (for an irregular heartbeat), and Viagra® (sorry, fellas).

Grapefruit juice most commonly interacts with drugs by inhibiting the metabolism of the drug by the enzyme cytochrome P450 (specifically the CYP3A4 isoform). Normally, medications are broken down in the liver and/or the small intestine and then excreted from the body, but since grapefruit juice contains compounds called furanocoumarins which inhibit the drug from being broken down in the small intestine, the drug doesn’t leave the body and is instead reabsorbed into the bloodstream. This leads to increased amounts of the drug in the bloodstream and thus an amplified risk for developing side effects.

The more sensitive the dosing of the drug is (the lower the therapeutic index), the greater the risk of consuming grapefruit juice will be. In other words, if a slight change in the concentration of the drug in the bloodstream has a high impact on the drug’s potency, then consuming grapefruit juice will have a much greater negative impact on the person taking that drug than would be the case if the potency of the drug in question was less affected by slight changes in the drug dosage.

The effects from grapefruit juice can last up to 24 hours, and it only takes one glass of juice for the drug metabolism of some drugs to be fully inhibited (Lilja, Neuvonen, and Neuvonen). Drinking grapefruit juice before, during, or after taking your medication can cause adverse effects. For medications taken daily, like birth control, it is recommended to minimize ingesting grapefruit/grapefruit juice during the entire duration of time the medication is being taken.