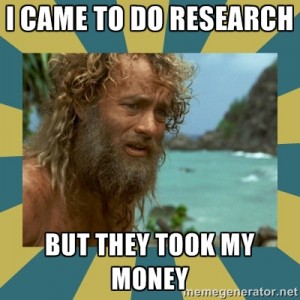 As a US citizen who travels internationally to conduct research, I’m well aware of the perception that gringos = $$. Sometimes that perception is true and you have money on your person or have access to it. But sometimes you simply represent wealth in some sociocultural way. Regardless of the reason, the fact is that I get robbed sometimes. Getting robbed is no fun, but it does make for some good stories.

Robbers are opportunistic, and travelers are, by definition, out of their element, so opportunities arise to rob travelers. Robberies are also about communication, i.e., “Give me your money now.” Pretty simple, huh? Well, sometimes the solution (i.e., not getting robbed) can be just as simple. If the robber doesn’t speak English and the robbee pretends not to understand the phrase “Give me your money now” then the would-be robbery is at a communications standstill. This dumb gringo trick works great, and I’ll use it as long as no weapons or physical assaults are involved. Before I developed this trick, however, I did wind up engaging a robber in a conversation in his native language.

I was out in the Neotropical boondocks very late one night alone in the rain, catching toads (it’s what I do). A guy on a horse came up behind me and startled me. Yeah, I get really focused on toads, so scenarios like this can happen; and, I don’t hear well. I assumed that I had accidentally trespassed onto his land, so I initiated the conversation of apologizing if I had done so, and promising to leave immediately if I was out of place. Turns out he did not care at all where I was, but he did want to rob me. Immediately, I was kicking myself for making the evidently poor decision a few hours earlier, to put my entire research-travel grant funds in my pocket, rather than leave them in the truck on the highway. Eventually, after a long conversation, I convinced him that my boss (who did not exist) had all of the funds back in the fancy hotel in the capital city because no one with lots of money would ever trust it to some schmuck pathetic enough to be hired to catch toads on a rainy night with all these mosquitoes around. I showed him my bag full of toads as evidence of the veracity of my story. He agreed that this made sense, and then demanded my flashlight. So, I asked him please not to take my flashlight, because then I couldn’t even do my shitty job and I’d get fired. He got off the horse, gave me a hug, and said something to the effect of, “I’m sorry for you my friend, as your lot in life is even worse than my own.” Of course he had a machete, because he was an actual cowboy, but he never raised it at me. If he’d raised that machete, he would have had a few hundred dollars instantly.

So, not all robbers are necessarily bad people. But I’ll tell you who are bad people: corrupt government officials. As robbers, they have a huge advantage and they know it. They have, ironically, the authority of law on their side, and the mere threat of being arrested during my travels is scarier than any gun I’ve had shot in my direction. These guys always have guns. They also have the mandate to set up roadblocks and stop all cars in the name of programs like the War on Drugs. For the corrupt ones, their day job is to make sure that the only people carrying drugs and weapons on that road are the people from the pre-approved local cartel. So they are not kidding when they search or grill you hard about carrying unauthorized drugs or weapons; just don’t conflate their diligence with caring about preventing drug trafficking. Once they clear you at the roadblock, they sometimes settle into robber mode. This authoritarian backdrop makes for some effective robbing. The game becomes a push-and-shove of “how little can I give them” vs. ”how much do I think this guy has on him.” To their credit, they are smart enough to realize that they have to be practical and discrete about all of this because if they just carjack you and take everything, then well it would be awkward to have you sitting there on the curb, and they have the keys to your truck, but they can’t take off with your truck until the end of their shift. These guys are not dumb thugs. They are fully aware of their advantage and thus are really impatient with any attempts you may make to stall the obvious outcome. In other words, I tried the dumb gringo trick at a roadblock exactly once. It escalated very badly, and they got all my money. Lesson learned.

The wandering toad-seeker runs into other brands of robbers as well. Gas station attendants can make a great cover for a top-class grifter. These folks have all day every day to figure out new, and often ingenious, tricks to rip off the customer. Again, they have an advantage on their side. You stopped and engaged them in this transaction, you need the gas that only they can access, and at some point you are going to give them the amount of money that they say you owe them. Add in the ever-bumpy cultural and language barrier plus, in my case, raging dyscalculia, and they definitely have the upper hand. If you do not pay them what they say you owe them, then you are stealing which is illegal (see “getting arrested” above). What are you going to do…drive off without paying? I dare you. The solution is to learn the more obvious scams and block them before they can play out.

Hookers are a complex reality. I want nothing to do with hookers, but, as a male gringo, they come to me. Remember gringo = $$ and, I usually wind up spending a lot of time politely declining the well-crafted and earnest sales pitches of hookers who assume I am rich. One night, however, the terms hookers and robbers became synonymous. After a moderate round of drinking in a large tropical city, my gringo colleague and I were walking back to our shabby hotel. He picked the route back, I argued against it because it seemed sketchy, but he won the argument. So I’m crossing the dark lonely back alley that people like me know to avoid and suddenly I am physically surrounded by three hookers who are busily putting their hands in my delicate areas and busily cramming my own hands into their delicate areas. There are eight hands involved here. My two hands are “occupied” against my will and the other six hands are occupied with violating my privacy and rifling through my pockets. Take-home advice: don’t wear baggy shorts in sketchy neighborhoods at night. It was over in seconds and they were gone. I’m not dumb, so I didn’t have my passport or watch or anything like that on me. They got my six leftover dollars that I had not spent on beer. Ok, so I got mugged or whatever, and they got six dollars. No one got physically hurt, and it was far less terrifying than the threat of getting arrested by corrupt cops.  What was really terrifying was my first response to the assault: I launched into my rote spiel politely declining their sales pitch. That is how off-guard I was to the actual situation; it didn’t even occur to me to fight back, or run, or scream or anything remotely more rational than essentially saying “no, thank you.”

Afterwards, and to this day, the truth slaps me hard. I wasn’t being solicited, I was getting robbed. And whether the robber is a street thug, an official, a grifter, or a lady of the night, the victim is always the same: the hapless gringo perdido.