Herpetology and getting lost. These are the two driving themes of my life. They have shaped my career and enabled me to discover species new to science, but they have also cost me relationships, frustrated everyone close to me, and nearly cost me my life. Without them I would be a different person, so this is a ballad to the lost art of getting lost.

After college, I left Santa Barbara, California to go to graduate school in Texas and study under a mid-career hotshot who specializes in Central American herpetology. He is a gringo North American but was raised in Guatemala and moving in-and-out of that culture is the norm for him. In the first year of my grad program I got the assignment of my dreams. I was to be delivered to a coffee plantation in a remote region Guatemala to conduct a survey of amphibians and reptiles. I was to do an ecological transect of herpetological diversity up the face of a very steep mountain in the Sierra de las Minas, in the state of Alta Verapaz. Although the area had certainly been populated since at least the Classic Maya Era, no biologist had ever worked anywhere near the region. If you look at a map of Guatemala, you’ll see a huge lake (Lago de Izabal) in the eastern part of the country. I was about 20 miles west of the lake, in the Polochic Valley, at the base of the north slope of a mountain called Cerro Raxon.  The village/plantation is called Pueblo Veijo (Old Village) in reference to the fact that the site had been inhabited by native Maya for millenia.  The problems turned out to be: 1) I spoke not a word of Spanish; 2) although I grew up in Europe (army brat) and was accustomed to being immersed in foreign cultures, I’d never been to Latin America beyond a couple family fishing trips to Baja California; and 3) Guatemala was embroiled in a horrific genocidal civil war (that was purposefully instigated by the US-CIA in the 50’s, by the way).

The day before I went to the airport my mentor gave me some topographic maps of my study site and said “If you get pulled over by anyone that looks like police or army, don’t let them see these maps because they will assume you are there to inform the indigenous insurgency and you will be arrested. Oh, and don’t bring those Vietnam-era military field boots you wear. They are US-Military issue. Get some boots that look more like a tourist would wear.” So I borrowed money from my parents and bought some brightly colored boots from the local REI. I put the maps in the bottom of my bag of gear.

I swear never again to travel so ignorant of my situation.  It turned out that speaking Spanish would have been only of partial utility, as I was sufficiently remote that most people there spoke Q’eqchi’, one of the many dozens of very distinct Maya languages in the region, and only a bit of Spanish. Every time I ventured beyond the main part of the coffee plantation (as was my task as a herpetological surveyor),  I encountered Mayan villagers who would drop everything and run away from me.  I was terrified. If they were scared of me, then there must be something that I should be scared of as well. Since my return, I have built a small library on the recent history of Guatemala, and I now know what I did not know then. It turns out that the chinks I saw in the concrete-block walls in the nearby town of Telemán were from a massacre only a couple of years prior to my trip.  Genocidal civil wars are real, and they are incredibly ugly.

I had an ecological transect to conduct, and I finally got myself up to the highest village on that slope of the sierra, a tiny Mayan village they called Peña Blanca (“White Stone” because there was a big one there) in Spanish, or some other name I never managed in Q’eqchi’ (Mayan dialects include glottal-stops in mid-syllable, so they are essentially impossible for the non-native speaker). The people seemed nice in Peña Blanca, and they did not run away from me. I set up a camp outside their village, with their implied permission. The first two nights I had a small crowd of people around me watching as I made a crappy camp dinner and prepared my specimens, samples, and notes. None of us could really talk to one another, but I managed to get across that I hoped to camp there, wished them no trouble, and planned to wander around outside the village looking for snakes and frogs and such. They were cool with that, and even brought me all the snakes they killed in their cornfields every day (very useful specimens for me).

After a few days I hiked back down to my main camp on the plantation and got read the riot act by the fascist, racist Guatemalan manager for having “anything to do with those rebels on the mountain” (recall there was a civil war going on, essentially between aristocrats like this guy and the Mayans in the mountains). About a week later I went back up the mountain to my camp, but this time not a single person would come anywhere near me. I was there for about three days when it dawned on me that I was doing a bad thing—my self-serving data collection for my degree was severely compromising their daily life. No kids were playing outside, and the men were sneaking off before sunrise to tend the corn.  I assumed they returned from the fields, but I never saw them. Evidently, someone had spread word that I was not what I seemed. I felt terrible, but packing up camp and leaving was not such a simple affair because I was so far up on the mountain. So I had to spend that night there, and planned to leave the next morning—carrying what I could on one trip (it took about three trips to get all my stuff up there), and leaving everything else for them; things I naively hoped could be useful (e.g., sleeping bag, not a bottle of formaldehyde).

Evening set, it began to rain, and I realized that this was my best and last chance to sample the highest part of the mountain because I never intended to return. Nocturnal amphibians and reptiles move in the rain, and it started to rain to rain really, really, really hard so I did get some good samples. Around 1:00 am I was exhausted and turned to go back to my camp. On the way back I took a wrong fork in the trail (it was still really raining and, if you wear glasses like I do, one cannot look around during a rainstorm; you look straight down, at your feet) and I wound up not in my little encampment, but smack in the middle of this village. I was disoriented, wet, cold, and scared. As I looked around, my mega-flashlight (standard issue in my line of work) was beaming through the twig huts and wakeing everybody. I could hear commotion coming out of the huts. My first thought was of regret—oh, darn, now I’m waking everybody up! Then I started to hear machetes tinging, guns being loaded and cocked, and saw barrels sticking through the slats. I’ve since learned that it was standard practice for Guatemalan Army squads to wipe out “rogue” villages by sending in troops in the middle of the night—with mega flashlights—to massacre and set fire to entire villages. I was mortified, and terrified. So, I just started yelling “Gringo perdido, no hay problema” and “Culebra! Rana! Sapo!” at the top of my lungs. That all translates essentially into “Lost white-boy, there is no problem. Snake! Frog! Toad!”  Meanwhile I dashed in the nearest direction that did not have a hut. I clawed my way up through a steep muddy corn field and finally found my camp. At the first glimmer of daylight I left and never went back up there. I regret that I caused them so much distress, I really do. I’m glad they did not shoot me. But given what I’ve learned since then, I’m amazed that they did not. I’m convinced that those few words in Spanish, “Gringo perdido, no hay problema” and “Culebra! Rana! Sapo!” saved my life.

I’ve returned to Guatemala many times since then, but things have changed. The war mellowed out, even if the original tensions remain. I never travel alone. I’ve learned Spanish (but no Mayan dialects, beyond a couple of animal names).  And I am not so naïve. To be sure, there were many more adventures and misadventures over the years, including a murder right in front of my face, but nothing since, anywhere, has been so personally transformative as that particular night. I have a one-man punk band called Gringo Perdido and some friends use the phrase as a nickname for me. No one wants to be known for being an uninformed, unintentionally inconsiderate, disoriented boob, but a colleague of mine returned from Guatemala recently and said,  “Joe, do you realize that every young biologist in that country knows that story?” Gringo perdido, no hay problema. 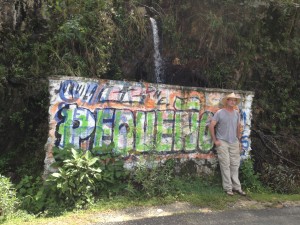