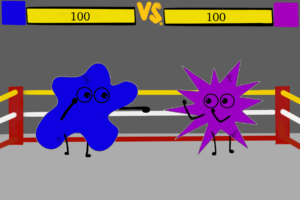 Begin by taking this fun quiz! –> Are These More “Bouba” Or “Kiki”? (buzzfeed.com)

Were you among the majority that named the spiky figure Kiki and the round figure Bouba? It seems that this is the case for many individuals. This question of “Kiki or Bouba” emerged with the famous psychological experiment conducted by neuroscientist V. S. Ramachandran and Edward Hubbard (Ramachandran and Hubbard, 2001). They asked American and Tamil Speakers to match one of the names to each of the two figures. The results were overwhelmingly the same; enough so to have a significant meaning. However, the real question now is, “Why?”

There are many theories to answer this specific question. The three that rise to the top are the linguistic, semantic, and perceptual hypotheses (Chen et al., 2021). The linguistic point of view theorizes that this is a result of the sensory-motor connections that humans make when learning speech. The semantic approach, on the other hand, highlights that people may have speech associations to certain meanings. Lastly, the perceptual hypothesis looks into the features of sounds, such as varying frequencies, in relation to the connections people make to those shapes. These hypotheses continue being tested in various ways to narrow down the potential cause of this fascinating effect.

On a similar note, have you ever associated a certain sound with a color or a number with a texture? When reviewing the literature of this phenomenon, a common term that is brought up is synesthesia. This term refers to the phenomenon that occurs when one particular sense is stimulated, but an individual actually experiences another sense (Huang, 2019). For example, hearing music but seeing colors as a result, or associating certain numbers to different colors. The reason this phenomenon is closely associated with the Kiki-Bouba Effect is because some scientists believe that the same underlying cognitive mechanisms take place for both (Ramachandran and Hubbard, 2001).

However, the Kiki-Bouba Effect is not just relevant to shapes and sounds as many studies have branched out and broadened this topic to other senses in recent years. For example, one study looks at different tastes in association with the Kiki-Bouba shapes (Bremner et al., 2012). Here it was found that taste and shape do not translate in the same way across cultures.

Although this may be very fun to think about… many people bring up other potential explanations and there are even some who doubt the veracity of the original conclusions found. One example is the debate on the shapes of the words and the actual shapes. This can be seen in the more “pointy” look of the letters used to spell Kiki compared to the more “rounded” letters used to spell Bouba.

Another concept brings up the idea of the frequency that a shape that looks like that would make if it were to break in relation to the associated Kiki-Bouba names. For example, a more jagged item would have a higher-frequency noise when dropped, which would correlate to the higher frequency emitted by the word “Kiki.” This could be related to the idea of onomatopoeias, which are words that sound like the thing they are describing.

With all of this in mind, all current research on this phenomenon is in the stage of finding out why this occurs. By answering that question, much could be unlocked. For one, it would reveal a fundamental component of understanding human perception. In knowing this, we could possibly even create robots that can perceive the world like we do!

Huang, H. (2019, June 28). What’s the neuroscience behind the Bouba/Kiki Effect? NBB in Paris. Retrieved from https://scholarblogs.emory.edu/nbbparis/2019/06/28/whats-the-neuroscience-behind-the-bouba-kiki-effect/