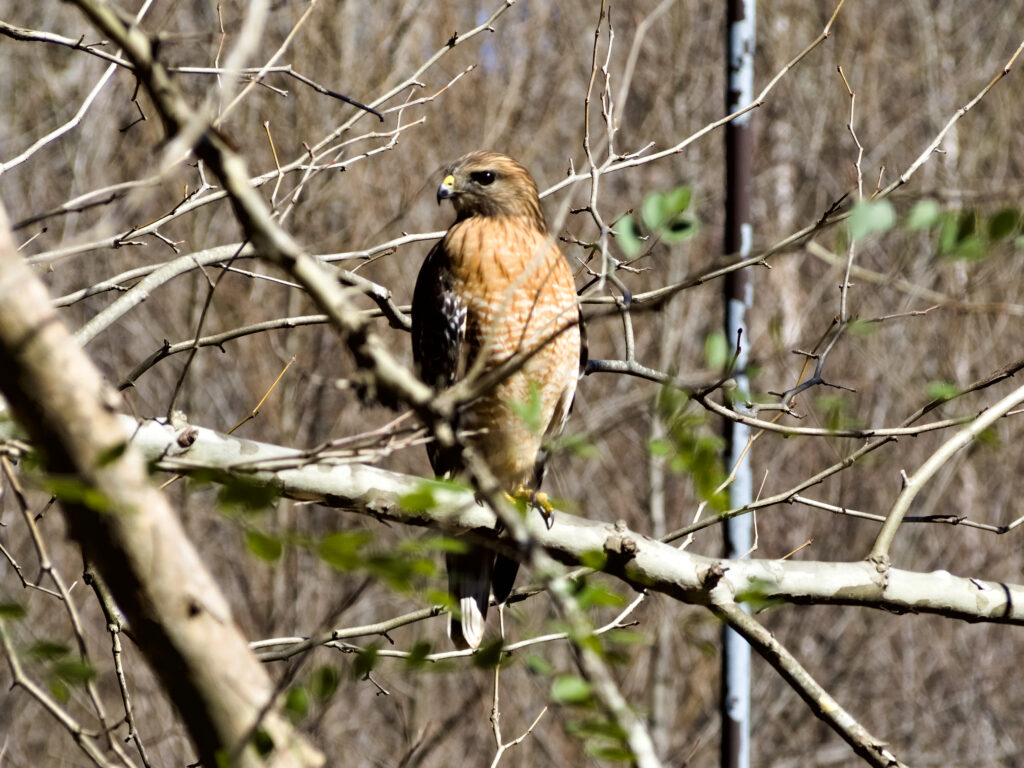 The red-shouldered hawk (Buteo lineatus) is a raptor that is found in forests throughout North America. Year round, the red-shouldered hawk is found throughout much of the Eastern and Midwestern United states. During their breeding season, they can be found in both the northeastern and western United States as well as part of Atlantic Canada. They also have a non-breeding range in Mexico, where they are found for some parts of the year. Red-shouldered hawks can be identified by their medium size and reddish-brown feathers on their chests and shoulders. Hawks from the western part of their range tend to be a deeper red than those found in the eastern part. As for their wings, the feathers are banded black and brown from the underside, with black and red being predominant on the outside. Their tails are also banded, which is another identifying trait of the species.

Red-shouldered hawks do show some sexual dimorphism in their appearance. Sexual dimorphism occurs when males and females of the same species show different traits on average, such as average size and weight. Mass is one of the traits that is sexually dimorphic for red-shouldered hawks. Females are larger than males, with the average male being only 85% of the mass of the average female. Researchers recently have tried to establish other ways of determining the sex of red-shouldered hawks morphologically. Determining sex by morphology is used by biologists to guess at the sex of an animal without needing to check for sure with DNA testing. Sex determination based on morphology is more convenient than determining sex based on molecular testing, and can be done by biologists in the field without access to DNA testing equipment. Other features of red-shouldered hawks that are sexually dimorphic are toepad length, length of secondary feathers, bill length, mass, and wing chord length. However, mass remains the most reliable way to morphologically determine the sex of a red-shouldered hawk.

Diet and Habitat of the Red-shouldered Hawk

The diet of the red-shouldered hawk is mostly made up of small mammals, lizards, snakes, and amphibians, and these hawks typically live in riparian forests. Riparian forests are forests that are on or near the bank of a river or stream. There is evidence that the composition of the red-shouldered hawk’s diet varies depending on where in their range they are living. One study split red shouldered-hawks into two groups. The first group was the northern hawks, which live above 38o N latitude. This is the latitude line passing just south of Charlottesville, VA, and through Lexington, KY. Interestingly, northern hawks preferred more mammalian prey and less amphibian prey. The opposite was true for southern hawks. Researchers noticed that diets were more mammalian in drier conditions, whereas hawks that lived in wetter conditions relied more on invertebrate and amphibian prey. It’s possible that hawks that live in drier areas will be less affected by wetland degradation than hawks in wetter areas.

Nesting Preferences of the Red-shouldered Hawk

Where red-shouldered hawks choose to nest is another area of interest for researchers. Typically, red-shouldered hawks prefer to nest in large tracts of mature forest, although they can also be found in more fragmented forested areas, such as those found in suburban areas. One study found that nests were more likely to be located near a lake or treeless wetland than not. Nests were also more likely to be near a trail or stream than not for both cases. Researchers believe that open trails might make good hunting grounds for the hawks, without trees and underbrush to hide prey. We can guess similarly about hawks’ proximity to lakes and treeless wetlands. The lack of trees gives hawks easier access to their prey, which they detect primarily via eyesight. Red-shouldered hawks’ positive association with wet areas is a well known feature – amphibians make an important component of the diet of the red-shouldered hawk, especially while nesting.