More
Articles today i learned (til) The Cilantro Controversy: A Scientific Look

Cilantro (also known as coriander) is a plant that has been cultivated for thousands of years. Cilantro, unlike your more run-of-the-mill herbs, has a very polarizing smell and taste. Eventually, research was done into the sharp divide over cilantro, and something fascinating emerged. Scientists found that members of certain ancestries are far more likely to despise cilantro than others. Twin studies were also consulted to see if there could possibly be a heritable element to being a cilantro hater. The link found was stronger for disliking the smell (.52) than the taste (.38). Respondents who didn’t like cilantro often referred to the herb as smelling soapy, which isn’t particularly appetizing.

How Do You Smell Cilantro?

Your brain has a specialized region dedicated to identifying smells, known as the olfactory epithelium. The olfactory epithelium sits right up your nose. The epithelium contains special proteins, which are chemicals in cells that do work, called receptors. These proteins are able to “match” up with one or a select few chemicals found in the air. You can think of them like poor quality locks that fit a few keys, rather than just one. Each receptor’s shape matches up to one or several molecules that you breathe in. 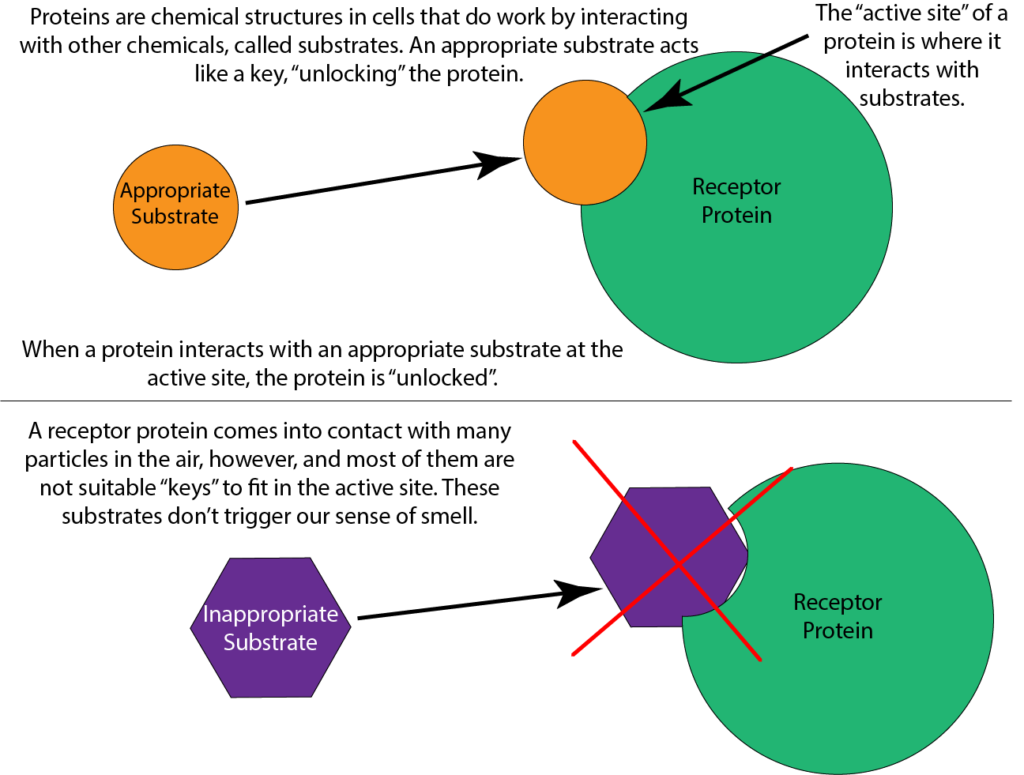 The chemicals that enter your nose when you take a whiff of cilantro are called aldehydes, in particular the (E)-2-alkenals (mostly (E)-2-decenal and (E)-2-dodecenal).  Aldehydes are a class of organic molecules found all around in nature. They’re grouped together as a result of the chemical structures they have in common. All aldehydes have an oxygen double bonded to a carbon. This carbon is bonded to a hydrogen and atom/group of atoms. 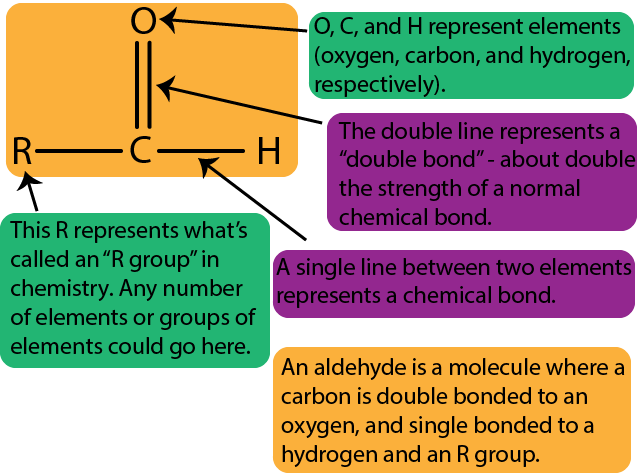 As cilantro sits out on your counter, some of its aldehydes evaporate in the air. When you smell the cilantro, those aldehydes bind to the aldehyde receptors in your olfactory epithelium. Then, the receptors tell the rest of your brain that you’re smelling cilantro.

Before we investigate the findings into the cilantro soap gene, let’s take a quick look at some of the genetics involved. Inside each and every one of your cells, there is a copy of your DNA. DNA (deoxyribonucleic acid) is made up of two long strands of repeating units called nucleotides. Each nucleotide has a nitrogenous “base” which the rest of the nucleotide’s structure hangs on to. The four variants of this base are identified by four letters: G, C, A, and T. How the sequences of these letters vary determines the genetic code. A gene is a section of nucleotides that corresponds to a protein. Proteins are molecules that do all sorts of important functions in the body. Remember the olfactory receptors we talked about earlier? Those are proteins. Variations in the olfactory receptor genes, for example, might change the shape of those receptors. Depending on where the shape of the receptor is changed, this could alter the sense of smell of someone with a changed receptor. There are different kinds of ways a gene can be mutated, or changed to be different from the “normal” version of the gene. One of these mutation types is known as an SNP (single nucleotide polymorphism), which means just one letter is different from normal.

This report conducted a genome-wide association study on 14,604 unrelated participants of primarily European ancestry. Two SNPs were found to be associated with finding cilantro to taste like soap. Let’s take a look at each of them. The first SNP was found on chromosome 11, located near the olfactory receptor genes. Researchers suspect that the SNP alters either the OR6A2 receptor or OR10A2 receptor. In particular, the OR6A2 receptor is known to be directly involved in smelling aldehydes, which is what we primarily smell from cilantro.

The other SNP that was found to be linked to smelling cilantro as soap was inside the gene SNX9. Researchers were baffled by this finding, as this gene encodes the instructions to create a chemical that helps cells communicate within themselves and re-construct their cell membranes when they duplicate. Now, this apparently has absolutely nothing to do with cilantro, and it’s very possible that it could be a false positive. However, the equivalent to this gene in mice was found to be associated with non-syndromic hearing loss in mice, so it’s not impossible to think that it could be related to human senses as well.

There were several significant differences between populations when it came to cilantro tasting like soap in this study. Women were significantly more likely to find cilantro soapy than men. Out of ancestries, Europeans were more likely than South Asians, East Asians, Latin Americans, and those of African descent to find cilantro soapy. No difference was found between Northern and Southern Europeans, or between Ashkenazi Jews and other Europeans. Although the South Asian group studied in this report was small, a significant association was found. This suggestion that there is a significant association between the genome and a person’s response to cilantro even outside of the European group. However, the heritability estimate made in this study was very low. This could be evidence that environmental effects and/or epigenetic effects have an impact on how someone tastes cilantro.