More
Articles today i learned (til) Should We Be Worried About Zombie Pathogens? 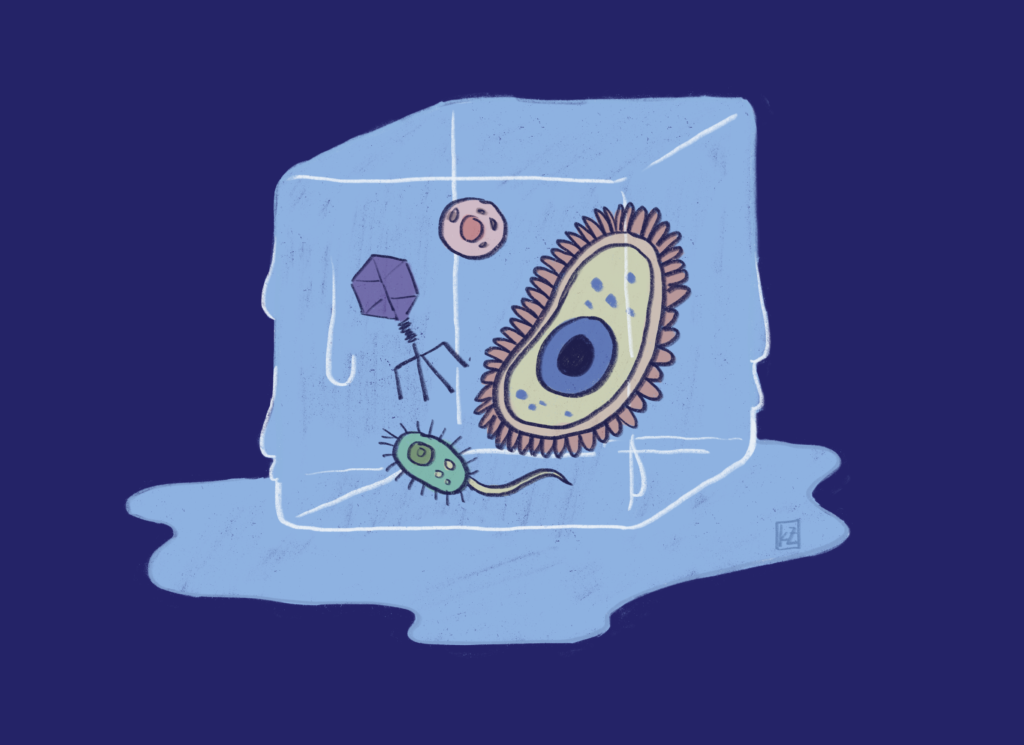 In the summer of 2016, Arctic regions such as Siberia and Greenland were hit with an unusual heat wave. As plants grew and water levels rose, a thick layer of permafrost that had accumulated from winters prior began to thaw, revealing something extremely concerning: anthrax-infected reindeer carcasses (Fox-Skelly, 2017).

That summer a 12-year-old boy in rural Siberia died of anthrax. Dozens of people were hospitalized for the same disease (Goudarzi, 2016). The region had not seen a surge in anthrax cases for over 75 years—so what brought on the sudden outbreak?

The consensus amongst researchers and Russian officials was that it was caused by the thawing of permafrost (the frozen layer of soil underneath ice and snow) induced by unusually high temperatures. The region saw temperatures around 35 degrees Celsius that summer, or 95 degrees Fahrenheit—much warmer than the usual ten degrees Celsius (Goudarzi, 2016). The warmer the weather the deeper the thaw, potentially releasing decades-old microorganisms from the soil. These microorganisms could be anything from harmless amoeba-consuming “giant” viruses to long-eradicated pathogens such as the smallpox virus—unfortunately in this case, what was unearthed were the carcasses of reindeer that had died from anthrax, allowing the pathogen to leech into food stores and water sources.

As soon as this story broke out, media outlets took it and ran with it. Suddenly we were faced with what seemed to be a new existential threat to humanity: ancient bacteria and viruses frozen in the ground, coming “back to life” as the earth continues to warm from climate change. “Zombie” pathogens that lied dormant in the ground would infect humans with bygone diseases such as 1918 influenza, smallpox, and bubonic plague. While the idea of dormant bacteria re-infecting humans is terrifying, how valid is it and how concerned should we really be?

In 2014, evolutionary biologists Jean-Michel Claverie and Chantal Abergel at the Aix-Marseille University in France were able to revive a giant virus, Pithovirus sibericum, that had been dormant in ice for 30,000 years. The virus is 1.5 micrometers long—the largest ever found (Yong, 2014). While it is infectious, its preferred hosts are amoebas and are harmless to humans. This discovery has prompted both the researchers and general public alike to acknowledge the possibility that other more dangerous viruses may also be capable of resurfacing as the Arctic continues to warm.

However, it’s important to note that Claverie and Abergel’s research pertains to viruses that target amoebas, not ones that targets humans (Doucleff, 2018). While P. sibericum may have been evolutionarily equipped to survive in frozen soil, that may not be the case for viruses responsible for influenza or smallpox that had evolved to thrive in warm human flesh.

Another piece of information to consider is that Bacillus anthracis, the bacteria that causes anthrax infections, seeping out from the soil and infecting animals is not new. In fact, there are French accounts of anthrax-laden fields wiping out entire flocks of sheep dating back to the medieval period, until Louis Pasteur developed a vaccine against B. anthracis in 1881 (Jones, 2010).

It’s not as if researchers haven’t tried to revive decades-old human-infecting viruses. There have been multiple attempts to revive the 1918 influenza and smallpox viruses using tissue samples from well-preserved arctic mummies, with varying degrees of success. While the attempt to isolate a living 1918 influenza virus proved unsuccessful, a Russian attempt to revive smallpox did result in their recovering parts of the virus (Taunbenberger, Hultin, & Morens, 2007; Doucleff, 2018).

At the present moment, the threat of another outbreak of smallpox or Spanish flu is unlikely. These viruses are maladapted to the cold and unable to survive without a warm mammalian host. We may not known what the future holds as climate change uncovers more microorganisms from newly thawed soil, but perhaps we should be more concerned about what goes on in the lab with our attempts to revive long-dead viruses, rather than fixate on the idea of zombie pathogens.