More
Articles today i learned (til) Life and Laterality

I have spent my life struggling to open jars, use scissors, play video games, and shake people’s hands because the world is built for the 90% of it who are right handed, the 90% that isn’t me. Like most lefties, I have learned how to use my right hand to do almost everything except write or throw things, because that is how technology is set up. I got so used to some of it that something like a left handed computer mouse is anathema to me; However, I remember having to struggle with both the piano and my teacher, because the whole concept was built opposite to me, or rather, I was built opposite to the concept. For one of my birthdays, I received scissors designed for left handed use and it’s still one of my favorite gifts.

I am the only lefty in my family. Both of my parents are right handed, and so is my sister. If we look at side preference from a genetic point of view it’s clear that right preference is a dominant gene. Starting with a Mendelian approach to genetics, to get both a right handed and a left handed child, both of my parents would need to have a recessive gene for left preference. Parents who are both left handed are more likely to produce left handed kids, but the ratio is only about 40% at its highest. (McManus, 1991) Families where the mother is left handed are more likely to produce left handed kids, which could be due to genetics or to socialization as the mother is often the primary caretaker, and there have been few adoption studies on the subject of laterality which could have helped clear up the nature vs. nurture debate. Men are more likely to be left handed than women. The ratios are still around 10% of the total population, but there is a small difference between sexes.

There have been a variety of tests to determine laterality in humans, split up into two main groups: hand preference and hand performance. The first type involves sending out a questionnaire to people, asking them to identify if they use their left, right, or either hand to perform a task and then measure the frequency of answers one way or the other. The second type involve asking participants to perform various tasks, such as placing pegs into holes, and measuring the time taken for the right hand and the left hand and measuring that way. (Porac, 2015)

By looking at the tools used by paleolithic people– the construction, wear, and reconstructing some of the hand grips– anthropologists have discovered that the ratio of human laterality (10% left to 90% right) has remained about constant since the beginning of human society. (Llaurens, 2009) The question is why this minority of left handed people has persisted almost unchanged. Scientist look both at genetics and social upbringing. It is unlikely though, that laterality is anything other than a mixture of the two.

One theory for the persistence of lefties is that there is a combat advantage. When most of the population uses their right hand to fight with a sword or spear, people who are left handed often learn how to fight against people who are right handed when they are young, while people who are right handed only know how to fight against right handed people. So, when a righty comes upon a lefty in a battle, the righty is tripped up by their opponent being opposite to what they expect, allowing the lefty an easier victory as they are already used to fighting right handed people. In fact, one study (Raymond, 1996) seems to support this theory; the researchers compiled data of the frequency of handedness in sports participants. Sports with a clear adversary like fencing or soccer had a larger ratio of left handed people than the normal population, while sports without opposition like bowling remained consistent with the normal population.

There is something to be said for the biological component as well. Plenty of lefties die of accidents caused by living in a society that is built for right preference (Coren, 1989), and many societies historically have killed, ostracized, abused, and retrained their left handed individuals to conform with the right handed majority, however, the ratio of lefties to righties in these societies is still close to the global average. The persistence of this polymorphism suggests a biological component that is nigh impossible to weed out completely. For example, fetuses have been shown to have lateral preference, which leads some people to believe that the cause of human laterality could stem from the uterine environment and/or hormonal composition, specifically how much testosterone is present.

The persistence could also be due to the aforementioned retraining. When people lose the use of their right hand– either because they lost their right hand entirely or had some other loss of dexterity– they are more than capable of retraining themselves to be left handed. Some humans probably learn to use their left hand because they were bored, think it was a useful skill, or just because human beings are contrary. People who have weaker natural side preferences are more likely to bow to the way they were taught, which could also be a cause for persistent left handedness.

Human beings are not the only creatures to display side preference. Most apes also show a preference for using one had over another when completing tasks on the individual level. (King, 1993; Lehman, 1993; McGrew, 1997) However, primates ratio of handedness is about 1:1 for left handed and right handed individuals in the total tested population. Lateral asymmetry in primates is a difficult thing to prove.

Why does laterality in humans present so asymmetrically? Some researchers have tried to connect this to language learning ability which is the basic trait used to separate humans from other primates. (McManus, 1991) The theory goes that the dominance of right preference has somehow lead to language development in homo sapiens. Researchers over the years have connected left handedness to shorter life spans and learning disabilities, but I think that this should be taken with a grain of salt and a reminder that correlation does not equal causation especially since a person’s laterality can change over their lifetime.

I am left with three questions at the end of my own research: Why do bilateral animals have a preference at all? Why isn’t everyone ambidextrous? Why are humans so asymmetrical as a species where laterality is involved? I don’t know, and an answer is unlikely to be found within my lifetime, but it’s fascinating nonetheless. 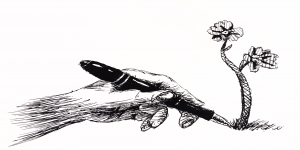