When I woke up today, I found that my neck and shoulder were extremely sore. I was totally fine last night before bed and I didn’t have any strenuous exercise yesterday.  I started to think that maybe sleeping position matters. Everyone has a favorite sleeping position, but what are the pros and cons of your favorite ones? 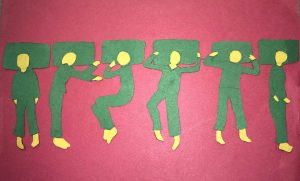 Face down is my favorite sleeping position, but it is actually this position that caused my neck and shoulder soreness. The prone position prevents the relaxing of the spine and also adds extra forces to muscles and joints. These extra forces make us feel very sore, numb or even tingly at some parts of body. The  prone position is especially dangerous for babies  According to a research study from Tasmania, Australia, the major contributing factor to the recent SIDS rate decline in Tasmania has been the reduction in the proportion of infants usually sleeping prone. [1] What’s more, a study about occurrence and mechanisms of sudden oxygen desaturation in infants who sleep face down had a conclusion that rebreathing in prone sleeping infants is associated with an increased frequency of episodic desaturations. Desaturation may result from respiratory pattern changes such as brief apneas often associated with evidence of behavioral arousal or failure to increase ventilation in the face of rising inspired carbon dioxide, also associated with behavioral arousal. [2] 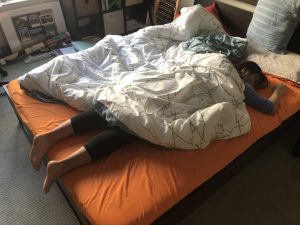 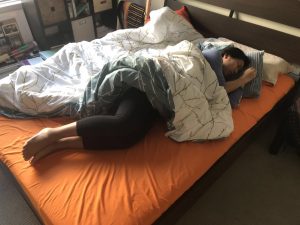 Supine position is the easiest but the most uncommon position for me. So I was surprised to find that supine position actually has advantages for preterm infants. A experiment about the effect of prone and supine position on sleep,apneas and arousal in preterm infants concludes that it is important to recommend supine sleeping after neonatal unit discharge for prematurely born infants because very prematurely born infants studied before neonatal unit discharge sleep more efficiently with fewer arousals and more central apneas in the prone position. [4] 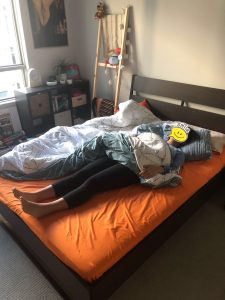