One month ago, my boyfriend and I went to Savannah for a visit. I’ve always heard there are a lot of nice little stores down pedestrian streets there. As a girl who has no resistance to delicate handicrafts, I couldn’t miss this great opportunity to buy something. Just when I was totally lost in those beautiful pictures and objects, my boyfriend dragged me to the corner of the shop with a mysterious smile. “Look!” He said while pointing to a sculpture. When I glanced at that direction, I couldn’t help exclaiming under my breath. It was a small sculpture of a child’s head. But “he” was so vivid that I almost believed that the two glass beads that made blue eyes on his face were real! Even my boyfriend refused to touch the sculpture because he was so terrified by its similarity to real person.

After learning about this hypothesis, I finally understand my fear of those creepy dolls, which are one of the most popular characters in scary movies. Also, this is why I don’t like mannequins and there are a lot of ghost stories about them, too. As a result,  A lot of shops use mannequins that only have body or an abstract oval “head” without face features to make sure that customers will feel comfortable. It may explain why a lot of people have fear for clowns and why toy factories seldom design dolls that are totally the same as real people. 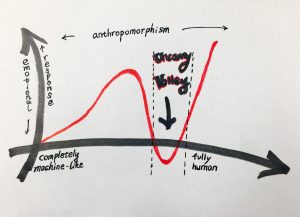 One classic example of avoiding uncanny valley is Disney cartoon movies. Disney has created many lovable cartoon characters like Pinocchio, Cinderella, and Snow White. Looking at these cartoon characters, we donot feel any revulsion, we actually have affinity for them. What’s more, most audiences were crazy about robot characters like Baymax, WALL-E and EVE. Their huge success also proves the importance of applying uncanny valley hypothesis. Because when the appearance of a robot is made more human, obervers’ emotional responses to the robot become increasingly positive and empathetic, until it reaches a point beyond which the response quickly becomes strong revulsion.

However, some people may still have questions. Why do we love those humanlike robots in TV series West World then? This is because the hypothesis also says as the robot’s appearance continues to become less distinguishable from a human being, the emotional response becomes positive once again and approaches human-to-human empathy levels. So the uncanny valley is actually a range between a “barely human” and “fully human” entity. 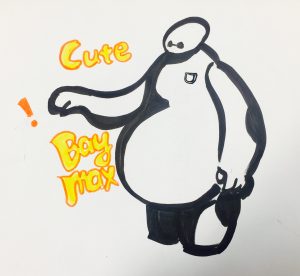 And according to research, reducing consistency in human realism increases the uncanny valley effect. What’s more, this effect was stronger when realism in the eyes, eyelashes, and mouth was low, just like the example in this picture.[2] people in second column have extreme big eyes, which elicit the strongest eerie and revulsion (or uncanniness) feelings in viewers among three columns.

There are a lot of hypotheses to explain the existence of uncanny valley. Some people believe that uncanny valley is the outcome of long-term evolution and is a typical emotional response of stranger avoidance theory. Avoiding unusual individuals is a way to protect ourselves. Humans sense and avoid those who look not normal because they seem unhealthy or might have a hereditary disease. As a result, when an object makes us feel it is neither human nor a typical robots we instinctively have feelings of aversion and fear.

But based on the evidence of other researchers, it seems that realism inconsistency theory is the best way to explain uncanny valley. Because this theory explains cold, eerie feelings elicited by transitions between instances of two different, mutually exclusive categories, given that at least one category is anthropomorphic: Cold, eerie feelings are caused by prediction error from perceiving some features as features of the first category and other features as features of the second category. What’s more, in principle, it can explain not only negative evaluations of transitions between real and computer modeled humans but also between different vertebrate species.[3]

No matter which theory is right, we now understand that our uncomfortable feelings for nonliving things that seem human are a result of the uncanny valley. So if you are frightened by scary creepy doll movies or clown masks in the future, just tell yourself, it is all because of uncanny valley, totally science, no big deal and you will be fine.