More
Articles today i learned (til) Megalodon: Fact or Fiction? 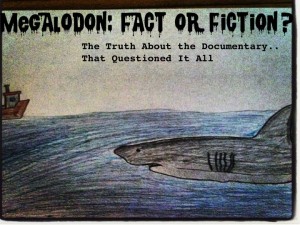 Barbies? Yea right. Doll Houses? Please. I was never the little girl who played with mini tea cups and pretended my stuffed animals were my fellow beauty-pageant friends. I was the girl outside shooting Nerf guns at the neighbor boys and exploring the deep ends of the woods in my backyard. I’m sure my mom was thrilled when I brought pet bugs home from school rather than glitter-filled artwork. Nonetheless my fascination for bugs, animals and anything living for that matter started from a very young age. To this day I find myself watching Discovery channel till wee hours of the night or researching the latest species found in the far corners of the Amazon. It was not until recently that I began indulging in my extreme captivation with sharks.

Although I would never want to find myself next to one of these sharp-toothed vigilante creatures, the fear and complete awe I feel every time I read, watch, or hear about them gives me an experience unlike any other animal I have studied. They are powerful, stealthy and the ultimate kings of the water. Many can swim up to 40 miles per hour and some can produce up to 20,000 teeth in their lifetime constantly replacing ones that fall out. However, no shark is as intimidating or interesting than the biggest shark that has ever existed…the MEGALODON. And yes, it was mega. This ancient beast was said to be up to 60 feet long and weighed about 77 tons. Just to give you an idea, that is the same mass as 7 school busses. Its size was almost 4 times as long and 15 times the mass of a modern great white shark. That’s big! The Megalodon usually preyed on blue whales and other large fish. In fact, the Megalodon had the jaw strength to crush a whale’s skull in the same way a human jaw can crush a grape. Imagine what it could do to a human skull. Yikes! It was by far the biggest predator in the seas at the time. Because the fossil record dates back 28 million years and is almost completely comprised of teeth, some scientists debate its size, its strength and even its existence. However what current researchers are still stumped with is answering the question, “Does Megalodon exist today?”

During shark week in the summer of 2013, the Discovery network aired “Megalodon: The Monster Shark that Lives.” On the program a group of researchers and Megalodon-enthusiasts analyzed a wide range of evidence claiming that Megalodon still exists. For shark lovers like me, the prospect of actually seeing glimpses of Megalodon was enough to get me hooked. On top of the shark fanatics, more than 4 million people tuned in nation-wide to watch the special with hopes of learning, seeing, and believing in a modern-day Megalodon. Boy were we wrong. Throughout the show the “researchers” presented photos of half eaten whales claiming only a shark as big as Megalodon could do such damage. They presented eye-witness testimonies of sightings, boat attacks, and big black blurs in the ocean of the supposed Megalodon skimming the surface of the water. The final spectacle showed the “scientists” dragging a huge model whale through the water as bait with hopes of the Megalodon resurfacing and attacking it.

And….it did! Sure enough there was a giant explosion, a blur past the camera, and in a second the “Megalodon” was gone. The only redeeming factor of this somewhat ridiculous ending was that the divers were able to tag the animal that surfaced. Despite everything else in the documentary being completely fake, this part was a glimpse of truth. The divers were able to tag an animal that dove from the surface to below 6000 feet in seconds, a behavior unlike any other shark or any other animal for that matter. In the middle of all the bogus Discovery chose to broadcast, they somehow still managed to instill the belief that Megalodon exists solely by placing hope in a tracking tag. In fact, over 3 million of their 4 million viewers believed in Megalodon after the documentary, including myself. Many marine biologists have clearly stated that Megalodon does not currently exist and went extinct about 2 million years ago before humans existed. There is no doubt in their minds that it is gone. In fact, many of them laugh and scoff at the fact that after showing such phony information, Discovery was still able to convince a large part of their viewers that Megalodon is alive. After much thinking and research I have come to my own conclusion. I do not believe that Megalodon is alive but I still hope it exists. While the documentary was full of misleading information, two unforgettable facts keep me hoping.

First, the tag proves that there is some kind of animal down there that is able to dive that deep that fast. Second, the fact that only 5% of our oceans have been explored leaves the other 95% up to our imagination.  Who knows what’s out there?  With that being said, is there hope that Megalodon still exists? In the minds of scientists the answer would be a cold solid NO. But in the minds of hopeful shark fans like myself, myth-lovers, and the curious general public, Megalodon may very well still be lurking at the bottom of the ocean in waters we may never be able to explore.