Check back every Friday for another chapter of Awakening, Nuelda Book 1, by Linda Harley.

Can’t wait for the next installment?  Download the whole book right now at https://www.smashwords.com/books/view/243087 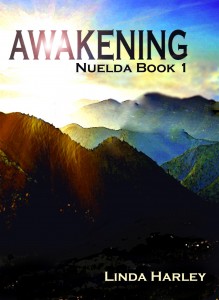 White penetrating light blasted into Anna’s eyes. Her entire body felt numb from the cold and she could just barely move her toes. She lay in a glass casket, her body suspended in the air. The pressure in the casket started to change as she drifted to its bottom. The smell of rust and sweat swept into the casket as the lid popped open to release her back into civilization.

The smooth face of a man came into her field of vision. “Don’t try to move Anna,” the man’s soft voice purred in her ears. She tried to nod, but none of her muscles responded.

Anna closed her eyes and tried to remember why she was here. It felt like just moments ago that she had been hugging her mom and dad and telling them goodnight. They had promised her that they would wake her once a cure was found for her cancer, but that they would wait no more than 3 years before bringing her out of cryostasis. How much time had passed? Days, weeks, months or years?

“Try to wiggle your toes Anna,” the man instructed and she obeyed. “Very good. Now flex your foot.”

Slowly and painfully, feeling returned to her body. Her bones ached as she tried to sit up in the casket that stood in the center of the return room. Rusty cables hung from the ceiling and were connected like a spider’s web to her casket. Behind the dirty glass wall stood a bank of computers, with one red-haired smooth faced woman operating the controls.

The man that had woken her stood next to the casket holding out a tattered wool robe. He helped her out of the casket and hung the robe on her scrawny frame. The robe enveloped her into its warmth but she nearly collapsed under its weight. She would have fallen but the man placed his arm around her shoulder and held her upright. “Come, you must try to walk. Your legs and body will remember what they’re supposed to do better if you move around.”

Anna hesitantly took one step and then another. Soon she was able to stand on her own, albeit with shaky legs. Finally she mustered up the courage to try and speak, but it came out as a horse croak. The man brought her a glass of water, which she drank thirstily. “Where are my parents?”

“They’re not here,” the man replied.

Anna fought back the tears that were pushing their way to the surface. “You’re lying. They promised that they’d be here.”

“I’m sorry but they’re not,” the man repeated more gently.

Anna took a deep quivering breath. It felt good to breathe on her own again, even though the air smelled of rust and grease. Her bones complained at the abuse she was doling out on them. A stool stood at a decrepit workbench. She slowly sagged onto it, not knowing what to make of it all. “What’s your name?”

“My name is Nick. Would you like something to eat?”

Anna nodded and Nick produced a banana, a tomato and another glass of water. Slowly Anna reached for the banana and peeled it. Breaking off small pieces at a time she ate it, stopping now and then for a sip of water. Nick had disappeared to talk with the woman in the control room, leaving her to work on her snack in solitude.

When she finished, Anna left the banana peel on the table feeling guilty. Her mom would have a fit if she just left her rubbish lying around, but she could not see a trashcan anywhere. When Nick returned, he told her not to worry, that he would take care of it.

Nick came to her side and helped her to get moving once more. “How do you feel?”

Nick led her into an elevator and pressed a button labeled Medical Ward. “Some of that is due to being in cryostasis for so long. The rest is due to your lymphoma cancer. But then you should be used to that.”

“How long have I been in cryo?”

“Look, there is a lot that I must tell you, but I’m not going to yet.”

Anna stopped and stared at him incredulously.

“I still have to treat your cancer. In order for the treatment to work swiftly you need to be in a calm state, like you are now, or we won’t have enough time with you. Do you understand?”

Anna shook her head. “I gather that whatever you have to tell me is not going to make me feel better, so why not just tell me?”

Nick sighed as the doors to the elevator opened. He led her over to a bed where he helped her to remove the robe and slip into a night dress and then under the covers.

Nick bent over and kissed her on her forehead. “Later, child.”

Anna bristled at being called a child by an adult. She was nearly 14, and knew more than they thought she did. They always spoke in whispers around her about her cancer, thinking she was not smart enough to understand them. But she understood every word, which was why she also knew that her only choice to live had been to go into cryo until a cure was found. Now there was a cure, but where were her parents? Were they watching her from an observation room while they administered her cure? She hoped that they were, and that all of this was normal. But then, why would Nick not tell her anything?

Nick came over and placed a calm hand on her shoulder. “Take a deep breath Anna. Everything is going to be all right. I promise.” Nick raised a needle and injected some medicine into her arm.

No matter how many times the doctors poked her with needles, she always flinched whether it hurt or not.

Anna felt herself drifting to sleep. She reached out and Nick took her hand. “Nick, please, just tell me how long was I in cryo?”