More
Articles today i learned (til) The Sound of Calm

This meme made the rounds on the internet, claiming that a song can significantly reduce anxiety. 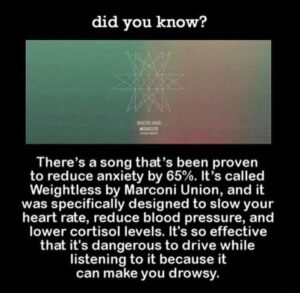 The song was even named one of Time Magazine’s 50 top inventions of 2011, quoting,

“Could this be the sleeping pill of the future? British ambient band Marconi Union has drummed up the world’s most relaxing song: “Weightless” is 8 min. 10 sec. of aural bliss, proved to reduce anxiety by 65% and slow heart rates by 35% as the listener’s body rhythm syncs with the song’s. Indeed, “Weightless” is so successful at inducing somnolence that scientists caution drivers not to listen to it while behind the wheel.”

Cortisol is a hormone released when your evolutionary stress response is triggered.

A release of cortisol means there will be more glucose in the bloodstream as well as substances that repair tissues, in case of a threat. Cortisol also suppresses the digestive and reproductive systems so that those do not impede you when you are facing an “enemy.”

One study from Deutsches Arzteblatt International found that listening to classical music actually did reduce blood pressure and cortisol levels in all participants, so music specifically engineered to calm people down from a state of anxiety could very well achieve its claims.

Another study analyzed the song Weightless specifically, finding that “‘Weightless’ by Marconi was able to induce greater relaxation levels in participants than a massage (increase of 6%). ‘Weightless’ also induced an 11% increase in relaxation over all other relaxing music tracks.” (British Academy of Sound Therapy).

The song has even apparently been used to calm patients before surgery, in a study published in the journal Regional Anaesthesia & Pain Medicine journal that showed that the song was just as effective as a anxiety-relieving drug.

It might be worth it to give the song a listen the next time you feel anxious and stressed!

What is Sound Therapy?

Sound therapy has been compared to a massage, where instead of a practitioner’s hands, the vibration of the sounds produce the sensations.

A research study titled, “Sound Therapy Induced Relaxation: Down Regulating Stress Processes and Pathologies,” outlines a proposition that nitric oxide produced in the body when undergoing sound therapy is responsible for the physiological effects in the body, providing a potential scientific basis for how sound therapy could be effective.

Even a quick YouTube search shows that videos claiming to be sounds appropriate for sound therapy have millions of views.

While it seems unlikely that sound therapy could be a significant treatment for mental illness, in combination with other therapy it may be a viable option, due to its non-invasive and accessible nature. 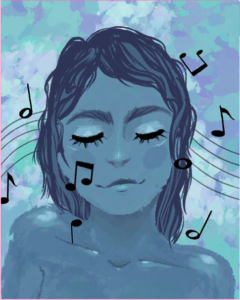