More
Articles The Evolution from Fossil to Monster

Humankind as a species is over 200,000 years old. We are travelers, storytellers, and connoisseurs of legends and tales. For thousands of years, mankind has entertained our children and fellow tribesmen with fables and stories of the unknown, the cryptic and the mythological. It is a unifying factor in our world. Every story needs a strong villain to maintain equilibrium and for many, the villain was the monster. From Greek and Roman to Japanese and Native American, fantasy and folklore have been influenced from the history of this planet. All cultures have created monsters to fuel their fears. Either to rationalize the unknown or to provide comfort for themselves, men and women of the past have created these stories for purposes that have been lost to time. Yet, monsters are alive and real today, be it in between a page or in a culture. These beasts came from our imaginations. However, many of these terror-bringers were imagined based on fossils, skeletons, or unknown sightings that frightened the inhabitants of their lands.

From tales of creation, to the flood, and even tales of doom, every culture has unifying legends. Some cultures produced monsters so terrifying that they were hidden and lost to time, while some have been immortalized in books, movies, and videogames. The primal fear of the unexplainable had to be justified through something tangible by mankind. Two monsters that have fueled the nightmares of children and men; two giants of terror that were produced from the unknown, can now be explained.

Cyclops are a cannibalistic giant race bearing a distinct feature: a singular eye in the center of their forehead. Notable cannibals and warriors in Greek mythology, the cyclops were born from the Greek God Poseidon but were cast away because of their grotesque ugliness. In Greek stories and in pop-culture, cyclopes have been used as a formidable opponent to heroes and heroines. The most well known depiction of the cyclops race comes from Homer’s The Odyssey. Other notable depictions have been seen in The Cyclops (1957), Wrath of the Titans (2012), and Tron: The Odyssey (2017).

According to Homer, Polyphemus was the cyclops leader on the isle in which Odysseus was stranded on his return home. Polyphemus was a sheep herder and a brutal warrior. During Odysseus’ time on the island, Polyphemus severed a man in half with a single bite and crushed a man in his grasp. A nightmarish scene that captures our fears of these cannibal giants; the infamous cyclops look, from Greek vases to modern day, has endured the test of time. 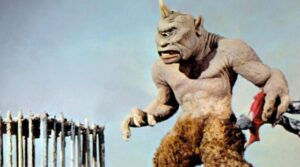 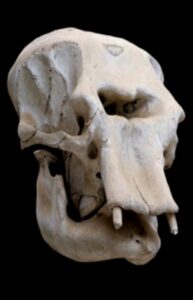 These skulls can easily be viewed as a horrific mono-visual monster. Ancient Greece had two different species of elephants roaming the area: The Cyprus Dwarf Elephant and the Cretan Dwarf Mammoth. Such large skulls would have to be supported by tremendous bodies. These skulls sported massive tusks and teeth which were perfect for crunching the bones of men.

In the early 20th century, Paleontologist Othenio Abel suggested that the inspiration of cyclops comes from the fossilized skulls of pygmy elephants found in the ancient Greek region. Found on Cyprus, Crete and many other surrounding Grecian islands, these ancient dwarf elephants died around 11,000 BCE. These elephants had a shoulder height of five feet, with an averaged- size femur of over two feet. Anatomically, elephant and human femurs look similar, which is a proposed explanation to the human element of the cyclops. From these basic anatomical parallels, the cyclops could have been born. When the image of the cyclops was mixed with human fear and superstition, the cyclops became the monster we know today: a giant cannibal terror.

The Yacumama is a South American tale that derives its nature from the Amazon river. Meaning “The Water Mother” in Peruvian, the tale dates back to that of the Incan civilization in the 13th century. A massive 30 meter serpent monster, the Yacumama had jaws that could swallow a man whole. In her legends, any animal or man that disturbed her waters became her prey. The local indigenous people would blow on conch horns to protect themselves before entering the water, believing the Yacumama would reveal herself if present.

South America has many depictions and lore of snakes. The Aztec and Incan civilizations both had powerful gods depicted as these slithering creatures. The Aztecs had Quetzalcoatl who created mankind. The Incas had Amaru who was the water God and protector of the rivers. The legend of the Yacumama can be traced back to the 15th century when it was told to the Spanish Conquistadors.

A modern depiction of the Yacumama:

As anacondas and rivers in South America are mutually inclusive, the pairing of Yacumama and her watery home was natural. South America is home to thousands of rivers including the Amazon, and is home to 169 species of snakes, including the world’s heaviest species: the Green Anaconda. The largest Green Anaconda recorded weighed over 500lbs and was nearly 20 feet long. The longest snake species, the Reticulated Python, which measured over 25 feet long, is not native to South America but is a related species to the Anaconda. While these are the largest snakes ever measured in current day, the largest snake ever found hails from South America: The Titanoboa.

The Titanoboa fossil found in Colombia created a fear of all ancient snakes. Weighing in at over 2,500 lbs. and reaching up to nearly 50 feet in length, this behemoth snake truly could have swallowed a man whole. This dinosaur-sized serpent could strangle and crush every living organism that came within striking distance until its extinction 56 million years ago. If these snake fossils had been found by natives in South America prior to the official paleontological discovery, a giant water serpent named Yacumama could have certainly been created to explain the phenomena. The Yacumama is possibly an exaggeration of a sighting of a large wild anaconda, or it could have been a fossil based explanation from an earlier find of a titanoboa fossil. A massive serpent, a man eater, and a terrifying hunter from the depths, the Yacumama was definitely a monster that inspired fear, but it is also a monster that can be flushed into explanation.