More
Articles today i learned (til) What’s The Connection Between Complex Chemistry and Islamic Medieval Architecture? 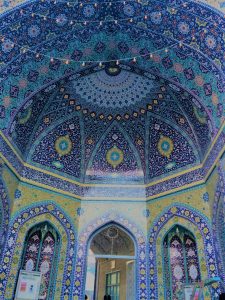 The expansive domes and minarets of famous mosques such as the Blue Mosque in Istanbul or Al-Masjid An-Nabbi in Medina exude a quiet, powerful energy. Oftentimes these are characterized by a large, stone courtyard. You walk through the simple, colorless path towards the mosque entrance. You feel cleansed, as if you’re leaving a part of the world outside; it’s almost unsettling. At a first glance, you could describe these mosques as plain. Crossing the threshold, however paints a different picture. Your sight is overloaded with bright jewel-toned colors: azure, emerald, turquoise, fuchsia, red. It’s hard to focus on one detail – will it be the gold leaf, intricate etch work, milky marble, shimmering glasswork? You are humbled standing underneath the enormous ceilings.

The glittering shrines and mosques that characterized medieval Islamic architecture are more than just a pretty sight, but in fact the product of geometrical planning. Aside from the lavish materials and colors, it is the tiling patterns that make the architecture stand out. These patterns are featured prominently in Islamic arts as a substitute for more figurative images. The reasoning was that images depicting people would lead to idol worship. Inside the mosque, you see these tiles plastered densely together on the ceilings, the columns, the minarets, the free wall space.(*)

Islamic interlacing patterns can be divided into two categories: the arabesque versus girih. While arabesque designs feature more curved elements in an effort to emulate greenery and nature, the girih is composed of geometric lines mostly of stars and polygons with interlaced lines. Muslim architects designed the girih tiling system with only two simple tools: a compass and ruler. These patterns became complex tessellations made up of up to five different shapes: the bowtie, rhombus, pentagon, elongated hexagon, and decagon. Between the 1200s to 1400s, Islamic art developed the girih exhibiting the same complexity as quasi-crystals, a material that defies normal atom packing. Back at the mosque, you trace your fingers along the figurative tiles that blend seamlessly. A lime green pentagon here, an ivory star there.You see that the tiles are made of contrasting colors with a multitude of small shapes.

Quasi-crystals are made of patterns that look regular but do not repeat exactly. The patterns in Islamic architecture demonstrate this by including “tessellations” that have five, ten, and twelve-fold symmetry. Technically, they are are not actually patterns, but just appear to be so. Scientists conjecture that Islamic architects wanted the effect of extend a pattern without just repeating images. Looking up at some of the mosques ceilings confirms the success of this design – you feel as if you are swallowed by the dizzying depths of shimmering oceans and bright stars.500 years later mathematical physicist, Roger Penrose at University of Oxford discovered the concept of quasi-aperiodic tiling. Sir Penrose stumbled upon a pair of tiles that cannot form a pattern in a periodic manner. This discovery was just a consequence of his work on the famous tiling pattern in mathematics – “given a collection of polygonal shapes, is it possible to cover the whole plane using just these shapes, with no overlaps?”

Quasicrystals are found mostly in metallic alloys such as (Al-Li-Cu), and lack translational symmetry. The discovery of the non-symmetrical packing of atoms took a while for the scientific community to accept. Although first discovered in the 1960s, much of the scientific community refused to believe that materials could consist of irregular atomic structure. Next, materials scientist, Dr. Dan Shectman, designed an artificial alloy with quasi-crystal properties. He did not publish his results for years because he feared that others would ridicule his work.  Only after researcheres found a  natural quasi-crystal, icosahedrite in the Koryak Mountains, Russia in 2009 that led people to be convinced. Shectman received the Nobel Prize in Chemistry in 2011 for this work.

Researchers connected Islamic girih and quasi-crystals recently; Dr. Peter Lu a physicist from Harvard University recognized ten-fold symmetry in architectural motifs while visiting Uzbekistan.  He analyzed 3700 Penrose tiles found in an archive of documented medieval Islamic architecture, and published a paper with Princeton University’s Dr. Paul Steinhardt titled ”Decagonal and Quasi-Crystalline Tilings in Medieval Islamic Architecture”. Dr. Lu uses the Darb-I-Imam Shrine in Iran as the iconic “near perfect” example of Penrose tiling. He conjectures that laborers could easily have created mathematically complex patterns by lining tiles decorated with lines that, once set down next to each other, form a continuous pattern.

Back at the mosque – you see a worshipper prostrated to the ground, oblivious of the art around them. Their hearts disconnected from the ancient mathematics and chemical mimicry in which they are enclosed in. Science and spirituality; a Nobel prize in chemistry yet also an artform. These two paradigms reside side by side in the glorious, kaleidoscopic patterns of centuries old Islamic architecture. There is an elegance in the scales that aperiodic tiling has reached – from the utterly microscopic crystals to the gigantic mosques that can hold thousands of people.