Which dessert can take shape as a chip in your favorite cookie or as a bar, and can be enjoyed in both a liquid and solid form? That’s right- it’s chocolate! Most of the time that you take a bite of chocolate, however, you probably don’t think about how a peanut-sized cocoa bean was crafted into the smooth, shiny, and sweet dessert of your dreams.

The complex transformation process includes a variety of chemical reactions among the approximately 380 chemicals that comprise it (Kuwana, 2010). In this article, you are going to learn about one such process that highlights chocolate’s unique chemical properties and how you can replicate this fundamental technique on your own.

The word temper meaning to heat to make hard applies to chocolate by making it solid at room temperature and perfectly melted you begin to chew it. As a chocolate lover, you should be very appreciative of tempering because the cocoa butter can solidify into 6 different kinds of fat crystals, however only two of these structures produce a stable/hard chocolate that is palatable (McGee, 2004). To ensure that the ideal texture is achieved, tempering is needed. 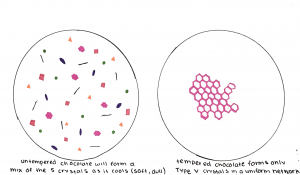 Tempering generally follows a three-step process of heating the chocolate to dissolve the fat crystals, lowering the temperature slightly to form a new crystal structure, and reheating to dissolve all unstable crystals. This way you are left with only the desirable and stable crystals, which can then control the development of the crystal network upon the solidification of the chocolate (McGee, 2004). The stable cocoa butter crystals have a higher melting point meaning they form at a higher temperature than that of unstable ones. This follows the same principles of the method of slow-cooling crystallization where a rapid drop in temperature doesn’t provide the stable crystals with enough time to assemble before the unstable ones are already forming. Basically, the key to tempering is keeping the chocolate temperature below the melting point of stable cocoa butter crystals, but above that of unstable ones (this varies depending on the type of chocolate and the ratio of cocoa and milk fats).

The Recipe (extracted from On Food and Cooking):

McGee, Harold. On Food and Cooking: the Science and Lore of the Kitchen. Scribner, 2004.