More
Articles today i learned (til) To Zoo or Not to Zoo: a Story of Harambe 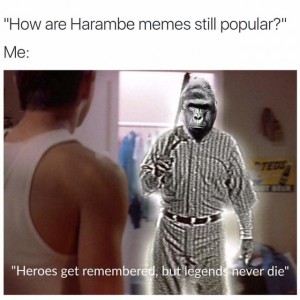 If you have been online at all the past couple of months, you have probably ran into Harambe–the latest meme hot off of the internet presses (wherever that is). Like, really, he is everywhere. It is kind of scary.

With many of these memes you will find a lot to the effect of #RIPHarambe or #neverForget. And yeah, it is kind of hilarious and kind of ridiculous and kind of sad at the same time. The majority of stuff you find online is probably not authentic, but as a great scholar once said, “At the heart of every meme there is a grain of truth.” Or something like that, I don’t know. 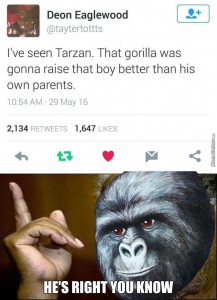 For the uninformed, Harambe was a gorilla at the Cincinnati Zoo and Botanical Garden. On May 28th, 2016, a young child climbed (or fell) into the enclosure. Frightened, the child begins to cry as the adult male gorilla approaches. I mean shit, I would probably cry too. This stresses out Harambe, and he begins to drag the child around the enclosure. It is honestly terrifying, and shows just how effortlessly this gorilla could kill a small child. If you haven’t seen the recording of the encounter, you really need to check it out.

After about ten minutes of this, the zookeepers decided to shoot and kill Harambe. In my opinion, this is both a simple and complicated issue. Simple in that a kid’s life was in danger. I mean, damn, look at that video. I am sure that many of people placed in that situation would make the same choice, but what about the alternatives? Why not tranquilize Harambe, then remove the child when the endangered Western lowland gorilla is out cold? According to zookeepers and primatologists responding to the incident, that would of just pissed the ape off before any effects took place. So that means Harambe had to be shot. This is where the problem becomes a bit more complex. Who do we blame for this?

Surely there is some pitchfork that can be grabbed–someone needs to take responsibility. Do we blame the child for wandering into the pit? Do we blame the gorilla for acting like a gorilla? Do we blame the mother for negligence? Maybe. I think Donald Trump actually (and shockingly, I know) summed this up quite eloquently.

Or, we could think about the zoo itself. Many people disagree with zoos. Whether it is for treating the animals poorly, being unnatural, or commercializing nature itself, zoos often take the hotseat when discussing eco-conservation. For transparency, I am not one of those people.

I love zoos, but I understand and empathize with many of those points. I believe, that in a perfect world, there would be no zoos in the concrete jungle, and that profit would always take a back seat to conservation. I agree that zoos must be kept under constant supervision in regard to the treatment of their animals. And I think the most important item on the docket is restoring natural habitats–Yes. All of that is important. But I also believe that how zoos support communities, and how zoos support conservation are also important.

One of my favorite memories from my childhood is visiting the Atlanta Zoo. I had the pleasure of seeing its famous silverback gorilla, Willie B., just before he passed away. My mom bought me a silver necklace of Willie B., and I thought it was the coolest thing in the world. My name is William Bradley Martin. My mom would call me Willie B., and now I got to see this awesome animal that had the same name! How cool is that? I still have the necklace to this day.

That memory is so important to me, because it was the first time in my life I found myself interested in science. I wanted to know more about it, no matter what shape it took. I read Zoo Books, watched Animal Planet, I would draw chimpanzees in a sketchbook I had. My young mind was on overload. Though this interest in science has grown and changed a bit over the years, I can trace it back to that specific moment. All because of a zoo. It makes me wonder, how many other people that now work in wildlife conservation were at one point inspired by some zoo or garden, aquarium, or museum? Zoos have been around for hundreds of years, surely some other sparks must of been lit besides mine.

So when I think of the Cincinnati Zoo and of Harambe and of the tragedy that happened, I am saddened. Yes, he had to be shot. But I believe that the blame is put on society instead of any one individual. Zoos can be a wonderful and enlightening experience – an opportunity to learn about a world that naturally we would most likely never come in contact with. But the moment the zoo is simply an amusement park, with horseplay (no pun intended) and spilt popcorn and kids running around like animals, someone – or something – is bound to get hurt.

Also, I highly recommend reading Life of Pi, by Yann Martel, for a beautiful and passionate defense of zoos.