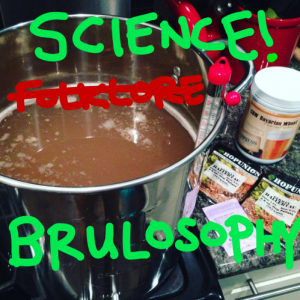 “One man’s making cheap booze is another man’s crafting an ecosystem in which a microorganism can thrive.” That’s my usual response whenever someone’s eyes go wide upon hearing that (a) I’ve used home brewing examples in my general chemistry class or (b) I’ve started plotting how to turn my six-week-old son into a young homebrewer. My love affair with homebrewing started in graduate school, where I was mesmerized by a group of older graduate students who were obsessed with brewing beer at home. This was back in 2010, before the “craft beer revolution” was co-opted by every dime-a-dozen hipster between Greenwich Village and The Mission. Cynical enough to be driven to drink but clever enough to apply chemistry to produce alcohol, my pioneering idols could be heard every Friday night discussing the challenges of growing hops at home or the merits of various sparging methods (read on). I was hooked.

I got started in home brewing when a Mr. Beer kit showed up under the tree one Christmas a few years back (thanks, mom). Newbies and experienced brewers alike love to read books and magazines written by a whole crew of pseudo-celebrities who regularly publish books and magazines promising the perfect brewing process, reminiscent of Calvin and Hobbes’s Chewing Gum Magazine. (Okay, we’re not quite that bad. But we’re pretty bad.)  What’s the perfect mash temperature? How much Sparge water should I use? Is my local water okay, or should I add minerals to it? Usually these works are heavy on oral tradition and light on science, which is surprising for a hobby dominated by engineers.

Enter Brulosophy, a blog that demystifies homebrewing with SCIENCE! Ring leader Marshall Schott is a clinical psychologist and homebrewer (take that, engineers) on a mission to test the mountain of informal homebrewing advice that has accumulated over the years. In a typical exBEERiment (xBmt), he brews two batches side by side using identical techniques, altering only a single variable. He then gathers a group of testers and does what is called a triangle test—more or less a scientific version of “two truths and a lie.” Each tester gets three beer samples, two from batch A and one from batch B. The tester’s task is simply to identify the unique sample from batch B. The logic goes that if a significant number of testers are able to correctly identify the unique beer, changing the variable during the brewing process had a significant impact.

Marshall is careful to recognize the limitations of his approach. The triangle test does not assess which of the two batches is better, just whether changing the variable by a specified amount makes an impact on the final beer. In essence, each experiment answers the yes-no question: does changing variable X by amount Y cause a noticeable difference in the final beer? Some exBEERiments include follow-up studies that address quality, but these are generally very subjective.

Still, the folks at Brulosophy have built up an impressive body of exBEERiments addressing everything from the ideal material for fermentation vessels (PET plastic versus glass, the eternal battle) to whether clarifying agents are worthwhile (they’re nuts for gelatin but surprise, it doesn’t have a significant impact). Their table of xBmts even lists a p-value for each trial, a statistical measure of how likely it is that the two batches are not significantly different. If you’re looking for an impact, a smaller p-value is better. Below, I’ve organized some of the more notable xBmts by the relevant stage in the brewing process. For those of us familiar with the typical brewing lore passed down on stone tablets through the ages, his results contain some reassuring results but quite a few surprises. Check out the table below for some of the most interesting results.