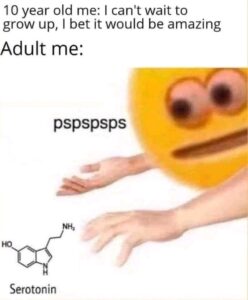 Take two of our Neurotransmitter Notes! If you are in the midst of finals season like me, maybe you want something to cheer you up. I might not be able to make your neurons fire off serotonin or oxytocin, but maybe learning about them will help you produce your own! Without further ado, let’s set the tone with serotonin…

“Am I going crazy

Not where I’ve been

Looking for my vibe

Wanna bathe myself in serotonin”

After dopamine, serotonin might just be the second most well known neurotransmitter. And like dopamine, it has effects beyond making you happier: it could be better described as a mood regulator that can also affect your sleep, digestion, and wound healing (Serotonin, n.d.).

But before you buy those serotonin gummies off the internet, be careful! Too much serotonin can lead to serotonin syndrome, This alliterative ailment can cause vomiting, headache, rapid heart rate, and muscle twitches (Dunkin, n.d.). In this situation, you really can have too much of a good thing. But what about the opposite?

A lot of people being treated for depression know about serotonin in the context of “the thing I need more of”. This perception is described in girl in red’s Serotonin:

Chemical imbalance got me twisting things

But there’s no depth to these feelings

From the corners of my mind

I’m terrified of what’s inside”

Indeed, depression is linked to lower activity of neurons that use serotonin. One of the most common antidepressants prescribed nowadays are the selective-serotonin reuptake inhibitors (SSRIs). The medicine girl in red describes is likely an SSRI, which works by preventing serotonin from being taken up by neurons after it is released into a synapse (the junction between neurons where neurotransmitters transfer a signal from one neuron to the next). This increases synaptic serotonin levels. Then, like if you were to increase the number of balls in a pinball machine, the serotonin is more likely to bind to a receptor on the other side, activating the next neuron. Boom–more activity!

And to round out our discussion of the three “happy chemicals” people know about, let’s talk about oxytocin! Now, oxytocin is technically a hormone and not a neurotransmitter (do you remember the difference from my last article?).  Compared to dopamine and serotonin, oxytocin is perhaps the one most related to gettin’ hot and heavy in the public eye. Just take a look at these lyrics from Billie Eilish:

You know I need you for the oxytocin

If you find it hard to swallow

I can loosen up your collar

‘Cause as long as you’re still breathing

Don’t you even think of leaving”

Here, she really shows the burst of excitement that can stem from oxytocin. Oxytocin makes us feel more connected to the people around us. However, it is not just released among lovers–it’s actually a key player in childbirth and nursing (Watson, 2021). It is also released during exercise, listening to music, and any type of physical contact. How touching!

That’s all I have for you all today. Take some personal time to relax and hug a friend (or partner)! We’ll get through this period together.

Check out this playlist with the tunes mentioned in this article, as well as some other neuroscience related songs! (Note: please be aware that some songs in this playlist may have explicit lyrics)

Serotonin: What is it, function & levels. (n.d.). Cleveland Clinic. Retrieved April 27, 2022, from https://my.clevelandclinic.org/health/articles/22572-serotonin