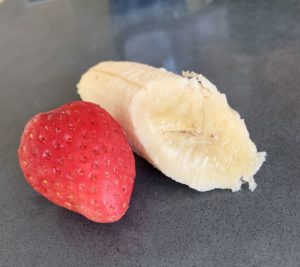 othie.  I wondered why the bananas did not have seeds but the blueberries and strawberries did.  I was wondering about that and this is what I found out that bananas originally did not look like the bananas that we see and eat today because they contained huge seeds throughout.  Bananas were originally cultivated from Southeast Asia and the western pacific. There were two wild species, Musa acuminata(AA) and Musa balbisiana(BB), native to that area that derived the bananas we know and love today.

The Musa acuminate(AA) and Musa balbisiana(BB) are considered diploids.  These bananas were not preferred because the large stony seeds made eating them unpleasant.  Diploid bananas had two copies of each gene-bearing chromosome. Since the diploid banana was unpleasant to eat, farmers started to breed bananas with fewer seeds to evolve them.  They used parthenocarpy and seed-sterility. Parthenocarpy is the capacity of fruits to grow and become full edible fruits without pollination. This means that the fruits would not require to have seeds inside to reproduce.  They slowly got rid of the seeds in the plant by doing a combination of inefficient fertilization, early abortion of the seed after fertilization, and sterile gametes. These processes allowed for future crops to have fewer and fewer seeds in them.  Because bananas don’t have seeds they have lost the ability to reproduce by seeds.

Another way humans evolved the banana fruit was by cross-breeding different types.  They would crossbreed Musa accuminata with Musa balbisiana. When the farmer selected the bananas to crossbreed they picked distant relatives so that when crossed they would have mismatched chromones which make it difficult to produce fertile ovule to pollinate.  With the crossbreeding the triploid banana was created. Triploid bananas were productive, larger, hardier, and drought-tolerant plants. This is why they were chosen over their diploid counterparts. Farmers still need diploid bananas for breeding since they are the sources of resistance genes to biotic factors.  Because of all the cross-breeding, most of the bananas grown today has very little gene variety. This means that if there was a worldwide pest outbreak, it would wipe out a majority of the bananas because of how common their genes are to one another. Because of this, the banana industry has adopted chemical treatments to control and prevent pest outbreaks.  Therefore the banana industry has adopted chemical treatments to control it. The new breed extended the range of the plant’s character and quality features. This led to the new breed of bananas being able to grow and breed in seasonally drier climate zones. This lead to the banana expanding into West Africa. Because of this migration when Europeans visitors came to West Africa they took the banana plant with them to the New World.

All About Bananas: Producers, Where They’re Grown & Why They Matter. (n.d.). Retrieved February 7, 2020, from https://www.bananalink.org.uk/all-about-bananas