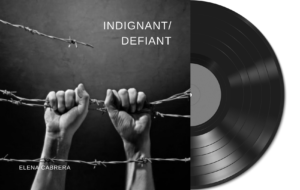 Welcome to Music and Emotions: A Series (Part 3)! In this part, we continue our series with the category of “Indignant/Defiant.” For a quick recap, an interesting study conducted by professors at the University of California Berkeley was conducted on how music evokes different emotions (Cowen et al., 2020). They decided upon 13 categorizations of music, one of which was “indignant/defiant.”  They found that the way that individuals classified music based on emotions was relatively similar. All of the songs included in the above album were utilized in this study and were some of the songs that participants most frequently categorized as “indignant/defiant.”

Here, it was found that music that typically landed in this category was characterized by a “growl-like timbre” (Cowen et al., 2020). This is something often seen in music that is perceived as aggressive. In addition, there is an interesting, brief, mention of the potential connection between the threatening vocal expressions used in these songs and that of various animal species. For example, the growl of the black jaguar. This could be why there is a clear male bias in the song choices in the album since males tend to have deeper voices which are more likely to mimic the growl of an animal.

Conversely, some examples of female-centric songs that could also fall into this category could be Shitlist by L7, Rebel Girl by Bikini Kill, and Ignorance by Paramore.

As mentioned previously, they decided upon 13 categories and even included an interactive audio map where you can go in and see all of the songs used and see how you match up. Stay tuned for more of this series… 3 categories down, 10 more to go! Which other category would you want to hear about? Comment below any songs you may think hit the mark for the “Indignant/defiant” category and how you matched up to others in the interactive audio map!