How do we see color, and what is the reason for color vision deficiency?

Light, as a wave, enters the eye through the pupil, and lands on the retina, the collection of cells on the back of your eye. The retina has cells called cone cells and rod cells. Rod cells can be stimulated by a very small amount of light, however they have a molecule called rhodopsin in them, which cannot differentiate between different wavelengths. Cone cells require more light to be stimulated, but they have photopsin in them which can help our brains differentiate between the different wavelengths of light. This is why cone cells allow us to perceive color. All cone cells do not have the ability to differentiate all colors of light though. There are 3 types of cone cells, and each is stimulated by a different range of wavelengths due to the type of photopsin it possesses. 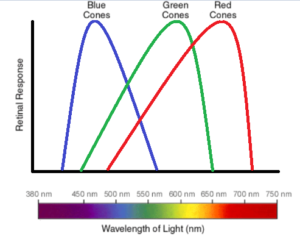 Because the ranges overlap for some wavelengths, sometimes cones can work together to differentiate certain colors. For example, the wavelength 625 nm, which corresponds to the color yellow, stimulates both red cones and green cone cells. Both of these cell types accept the 625 nm wave and send the signal to your brain that allows you to perceive yellow. 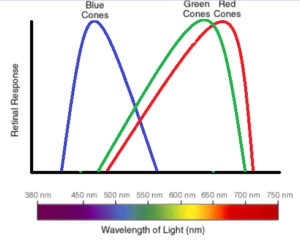 If you’ve been on Facebook recently, you may have seen videos of the reactions of colorblind people putting on colorblind glasses. En-chroma is a brand that has popularized what they call “color blind lens technology”. The technology works by selectively excluding wavelengths of light where the red and green peaks overlap. These wavelengths stimulate both the green and red cones at high levels in individuals with protanomaly and deuteranomaly. Because the glasses filter out these wavelengths, it helps the individual to see more differences between red and green!